April 16, 2020, 11:54 AM · In the early 1980’s, I was playing first violin in the Danbury Symphony Orchestra, a volunteer community orchestra in southwestern Connecticut. One night, at the usual Monday rehearsal, I was moved up to sit on the first stand with the orchestra’s Concertmaster. His name was Julian Altman and he was a rather elderly man who had recently moved to the area and was apparently a very competent and seasoned violinist who had played in a few professional orchestras and in nightclubs.

At some point during the evening, there was a break and he asked me if I’d like to play his violin. It looked old and kind of grimy, but I felt the need to appease him, so we traded violins for a little while. I noodled a little on it and played it in the rehearsal for a short while. I didn’t notice anything remarkable about the old man’s instrument and was happy to hand it back to him and reclaim my own violin.

A few years later I read a disturbing story in the local newspaper. Julian Altman was on trial for sexually molesting his own 6-year-old granddaughter. The sordid story of an alcoholic, gambling, womanizer was followed in the local media and Altman was eventually convicted and sentenced to prison. My life went on and I hadn’t thought much of old Julian Altman when, a few years later, I read of his death from cancer while he was serving time.

Here the story took a rather fascinating turn. Apparently, on his deathbed in 1985, Altman had told his wife to take good care of his beloved violin and had told her to look inside the case. When his wife got around to opening the case, she made a startling discovery. Inside were old, yellowed, newspaper clippings about the theft of a 1713 Stradivarius violin from a concert violinist named Bronislaw Huberman at Carnegie Hall in 1936. 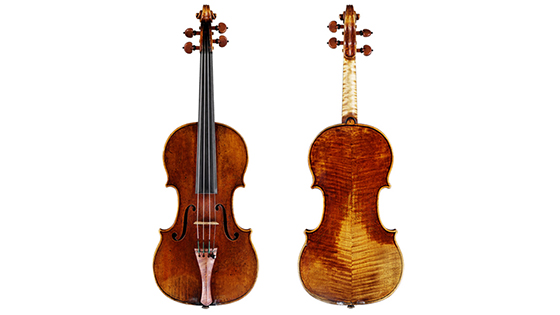 Altman had told his wife he’d purchased the violin for $100, but it was pretty clear that he had, in fact, stolen the instrument from Huberman’s dressing room while the violinist was on stage performing on his other instrument, a 1731 Guarnerius violin.'

I chuckled to myself with the realization that I had spent a few minutes playing on what turned out to be a valuable violin by the Cremona Master and named “The Gibson” because of its early previous owner, an English violinist named George Alfred Gibson. Altman had apparently used shoe polish to discolor the instrument and hide the unique varnish which would have revealed its origin and identity to any violin maker or repairman with any knowledge of valuable instruments.

In 2001, the story took a further twist when I read that the famous violin had been purchased by virtuoso Joshua Bell for just under 4 million dollars. Lloyd’s of London, which had paid the insurance claim to Hubermann, had purchased the instrument from Altman’s wife for a finder’s fee of $263,000 and subsequently sold it to a violinist from the Amadeus String Quartet, Norbert Brainin for $1.2 million. Bell had played on it and felt a strong connection, partially because of the instrument’s reddish varnish and his own work on the 1998 film entitled “The Red Violin.” Bell has concertized and recorded on the now renamed “Huberman” Stradivarius ever since.

So that was my one and only experience with a genuine Stradivarius violin. I’ve often had people approach me in the past with violins they found collecting dust in their attic which had the words “Stradivarius” or “Stradivari” inscribed somewhere on or in them. I’ve made a practice of dismissing them with the explanation that many modern instruments are patterned after the instruments of the Master and bear an acknowledgement for that reason.

And yet, there is nearly always that lingering feeling that “what if” there’s another genuine Stradivarius somewhere out there, with a story spanning 4 centuries, that has somehow dropped “off the grid” and been neglected or concealed for a generation or more? But then I reassure myself that it’s very unlikely and there’s no need to contemplate it. I held the real thing and played on it with no idea of its heritage and authenticity. And to this then naïve young man, it was just a moment in time, a faded memory of an old man asking me to “try” his violin and me being happy to get my own instrument back in my hands.

April 16, 2020 at 05:38 PM · Well I had the same story only I was the concert master of the WestConn orchestra and Julian sat next to me and asked if I wanted to try out his violin but I wasn’t impressed because the Ornati I was playing on blew it away in sound. Then when he died his wife called me and asked me to play for his funeral because he always talked about how much he liked me and thought a lot of me. Because of the surrounding circumstances I said no( I didn’t tell her that) because it really made me feel uncomfortable. I felt bad about the whole situation and quite honestly I think she made those accusations against Julien up. Oh well we will never really know. He was a very nice man.

April 16, 2020 at 06:14 PM · Great story, Richard! I had thought that Julian Altman played as a 1st violin section player so as not to draw attention to himself. I am always fascinated by this story, how he was coached by his mother to ply the doorman with a fine cigar, sneak up to the dressing room and hide the violin under his capacious Russian costume.

A few questions - do you remember a smell from the violin? You say the violin looked old and grimy; shoe polish usually has an odor. Could the disguising material have been something else? And how about the possibility of him not keeping the violin in good shape in other ways, so as not to advertise its extraordinary quality? For instance, moving the sound post from its optimal position.

Just stuff I wonder about!

(I left a longer message before signing in) - LD

April 17, 2020 at 09:19 AM · It is just amazing that even though a violin might be a Strad, if we don't know it, it could just sound like any other violin...thanks for sharing! That was a great story!

April 18, 2020 at 03:54 AM · Beside the crime-mystery aspects, the striking moral of this story is that there is nothing conspicuously remarkable in the sound of a Stradivari, compared to other good quality violins. I saw many ecstatic violinists (including Bell) praising the qualities of the "Strads", but I wonder if the praise is deserved, or mostly an "audible illusion" :-) caused by the fame of the Italian luthier.

April 18, 2020 at 04:35 AM · I also have the same suspicion as Larry does -- that he may even have intentionally done things to make the sound worse, such as moving the soundpost.