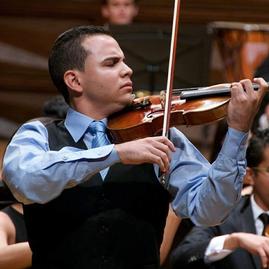 Samuel Vargas, 22-year-old, from Venezuela, grew up within the El Sistema Program from the age of 11. Samuel Vargas has received important prizes and awards, such as Concertmaster Ambassador of The United Nations 2014, Pin Artistic merit's city key of Prince George and Pin Central Bank in Canada and Classical Artist Award of the Year in 2016 for Football Metropolitan Federation in Venezuela.