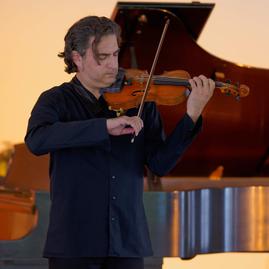 Violinist, conductor, educator and scholar, Iman Khosrowpour has given concerts in Japan, Germany, Canada, Brazil, and throughout the United States. He has soloed with orchestras in the Czech Republic and at the world-renowned Konzerthaus in Vienna, Austria. As a recipient of the highly competitive Aspen Music Festival Fellowship he has performed under the direction of maestros James Levine, Alan Gilbert, David Robertson, David Zinman and Hugh Wolf. He has performed for U.S. President Bill Clinton and extensively with the Grammy Award-winning Boston Modern Orchestra Project and the Albany Symphony Orchestra.

Iman is a much sought after teacher in his hometown of Irvine, California. A passionate educator, he maintains a successful private teaching studio, and his students have been concertmasters and members of regional and national youth orchestras, as well as winners of solo and chamber music international and regional competitions. They have performed at Carnegie Hall, Sydney Opera House and Segerstrom Hall and gone on to study at premiere institutions of higher learning such as Princeton, Columbia, Northwestern and Chapman Universities; University of Southern California; University of California Los Angeles; and California State University Long Beach.

An active performer, Iman is a frequent recitalist in Orange County and in Osaka and Tokyo, Japan and has given violin and orchestra classes in Germany, South Korea and Japan. As a chamber musician he performs regularly with Irvine Music Festival faculty throughout the year.

Born in Tehran, Iran and immigrating to the United States as a child, Iman began violin studies at age of eleven and quickly displayed promise, two years later becoming a student of Erick Friedman, prized pupil of Jascha Heifetz. He made his concerto debut with the Pacific Symphony Orchestra at age sixteen. A graduate of the Peabody Institute, Rice University, and New England Conservatory, he counts among his major teachers Mr. Friedman, William R. Kennedy, Sylvia Rosenberg, Kathleen Winkler and Masuko Ushioda. He studied chamber music with members of the Juilliard, Cleveland, Orion, and Borromeo string quartets, and has performed in masterclasses for Zakhar Bron, Koichiro Harada and Joseph Silverstein.