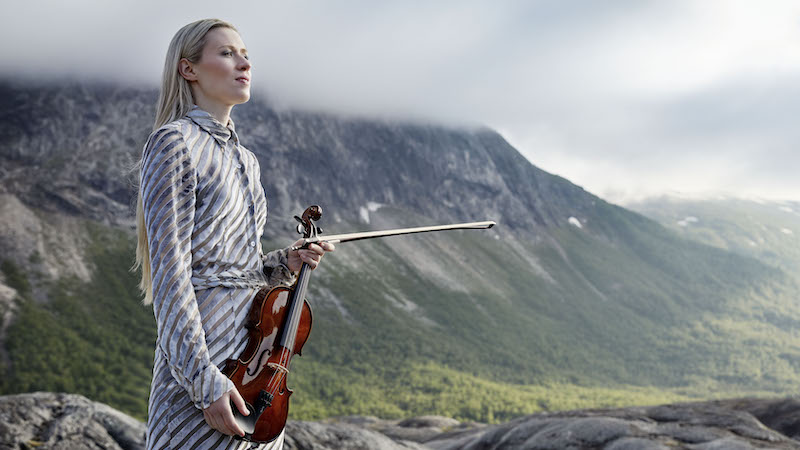 Interview: Musical Journey to the Arctic with Violinist Eldbjørg Hemsing

February 3, 2023, 4:09 PM · Norwegian violinist Eldbjørg Hemsing was born into music, born into a love for nature, and born into the far North - it's no wonder that she calls her new album Arctic a long-time passion project.

"I wanted to show a part of the world that most people will potentially not be able to see with their own eyes, to give a sense of the Arctic of the very, very far north," Eldbjørg said, "and to do so in a way that shows the beauty and the life that we need to preserve."

Eldbjørg, 32, grew up in a place full of northern culture, landscape and mythology, about three hours' drive north of Oslo and just 620 miles south of the Arctic Circle. I spoke with her in late January, right after she had finished a concert series in which she performed the Tchaikovsky Violin Concerto with the Oslo Philharmonic.

"I was born in a teeny, tiny little village in the middle of nowhere, in an area called Valdres, in Norway," Eldbjørg said. "Around 600 people live there, and it's very near the big mountain chains of Norway, called the 'Jotunheimen.' If you like Nordic mythology, it's also supposedly the birthplace of Thor with the hammer, and all those stories. My name, 'Eldbjørg,' actually means 'Protector of Fire.' The Nordic mythology is very strong here."

Her father, a scientist responsible for the protection of a nature reserve, instilled in her a love and respect for nature. "It's hard to find a direct translation for what my father's work is, but it's kind of a mix between a park ranger and someone who works for the environment," she said.

The music came from her mother. "My mom is a violinist, so it was the most natural thing to start playing," she said. Her mother, Bente Hemsing, was her first teacher, and she also taught her to play Norway's national instrument, the Hardanger fiddle.

January 31, 2023, 11:08 PM · In an effort to promote the coverage of live violin performance, Violinist.com each week presents links to reviews of notable concerts and recitals around the world.

January 31, 2023, 3:21 PM · The last time I saw Joshua Bell perform with the Los Angeles Chamber Orchestra, it was downright magical - their performance together of Bernstein's "Serenade" was just riveting.

On Saturday Joshua Bell will be back with the Los Angeles Chamber Orchestra, joined by soprano Larisa Martínez, this time for its "2023 Gala Celebration." The event, a fundraiser which also celebrates Grammy and Emmy-Winning composer and musician Danny Elfman and will include selections from his classical works such as his recent Violin Concerto "Eleven Eleven," will take place at Beverly Wilshire Hotel.

I had not interviewed Joshua since his marriage in late 2019 to Larisa, and speaking to both of them together on Monday was a delight - they even finish each other's sentences! They had not arrived yet in Los Angeles; they were speaking from their home in Westchester, the place where they spent much of lockdown and where they now still keep chickens. I started by asking them what it was like, getting married just a few months before a global pandemic.

"We got married in 2019 - before the pandemic," Larisa said. Joshua continued, "She had her Carnegie Hall debut four days after our wedding, and then I ran off on tour - so we we never really had a honeymoon at all," Joshua said. "So the pandemic gave us an opportunity to spend some time together. It turned out to be a silver lining to a difficult time.

It also provided some time for them to get their act together - literally. Their "Voice and the Violin" program, which they've been performing for several years, evolved from that time.

"We had always talked about doing something together," Larisa said, "but only vaguely," Josh continued.

"Then during the pandemic, that was just a great opportunity to develop it, find some repertoire, have some things arranged for us. So that is what became the project we call 'The Voice and Violin,' which we've taken to various places," he said. "It's a lot of fun to work together and make music together."
Keep reading...

January 30, 2023, 1:30 PM · Congratulations to the laureates in the 2023 Sphinx Competition! The competition started on Jan. 26 at the Max M. and Marjorie S. Fisher Music Center in Detroit, Michigan and concluded on Saturday. Here are all of the prizewinners:

Over two days, all participants had the opportunity to perform in master classes, with the finalists performing with the Sphinx Symphony Orchestra under the direction of guest conductor Kalena Bovell. Watch Njioma’s performance of Samuel Coleridge-Taylor’s Concerto in G Minor, Op. 80 here (video is cued to start at 35:05):

V.com weekend vote: How much have you spent, over a lifetime, on violins and violin equipment?