Edited: January 23, 2020, 12:34 AM · Long story short I have this violin, that was found in the house of an great uncle of mine who passed away (about three years ago), as far as we knew he never played violin, but was addicted to auctions, togheter with the violin was a bunch of other instruments he never touched as well(Piano, Clarinet, Trombone etc).

The violin itself was in shambles, open and without a bridge or a soundpost, I ended up keeping it because of a inscription inside it(back then I knew very little about violin, but could tell it might be worth more than I originally thought): "Copie de Antonio Stradivarius Cremonensis - Faciebat anno 1721" clearly indicating that it was a copy of a Stradivarius, which is not much, but I could sell it for something.

I ended up taking it to a luthier and after talking to him decided to restore it, and despite expecting nothing, it was miles better than my chinese student violin(for clarification I'm a student from Brazil) and it ended up becoming my personal violin.
The luthier assured me it was very good wood, and despite the damage it would make a fine violin, which it did, but he also said that from his experience it was probably a factory made violin and that from the (good, old, dry) wood it must have been from at least the 60's.

I've since given up on selling it now so I DO NOT WANT TO KNOW IF IT'S VALUABLE OR NOT, what I'm interested in now is that I found a logo I never noticed to the side of the inscription, and that logo looks a LOT like the Larsen Strings logo, a stamp with a cross and initials, only instead of the initials L. S. it's got A.S.

Does anyone know where in the world is this stamp from, and if it has any connection to Larsen company or founder, I'm pretty far away from Denmark haha so I doubt it, but if not why does it look so similar?

Thanks in advance to any awnser, I've been some years into solving the mistery of this violin, which I suspect has a pretty mundane history but I want to know it anyway.

Here's the logo inside it, as well as the violin 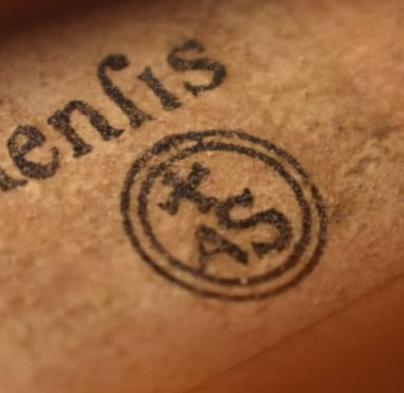 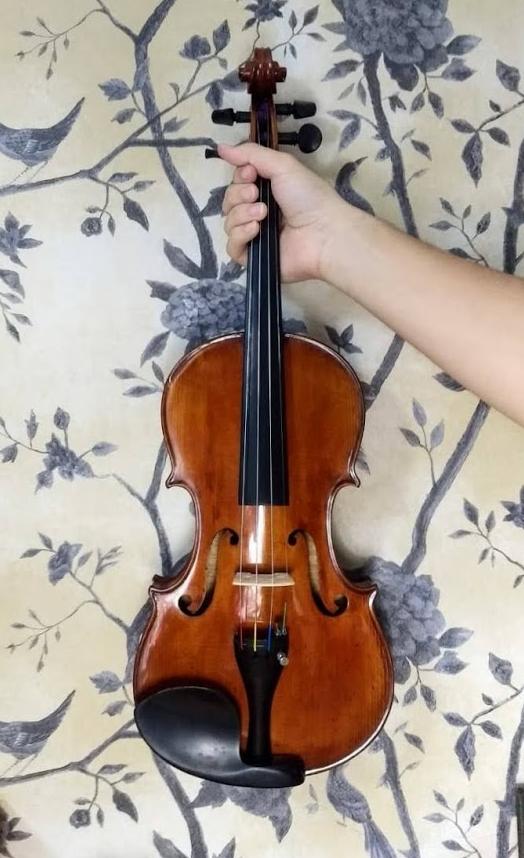 Lyndon Taylor
Edited: January 23, 2020, 12:37 AM · that's just a copy of the logo on the original genuine strads, there is some chance your violin is French, though as copie de is French

Ivo Bernabé
January 23, 2020, 2:41 AM · Ah!..I should have figured as much(A.S. Antonio Stradivarius, duh!), but thanks for the help! I knew someone here would know the answer but did not expect it this quickly haha!

I guess whoever (or whichever company) made this instrument didn't bother at all in leaving an identification, I guess they probably weren't very proud of their work...

As for the French bit that's a good new lead! Thanks! I, for some reason, always thought it was in Latin but the spelling doesn't check, it's french indeed (or at least made to appear french), how did it end up here in Rio de Janeiro tho, a mystery for another time.