Its how some people fake sautille?

Andrew Victor
July 10, 2019, 9:00 AM · Quoting Galamian
"The Fouetté or Whipped Bow (Marking: ) The whipped or fouetté bowing is derived from the accented détaché, but here the accent is produced by quickly (and barely) lifting the bow off the string and striking it down again with suddenness and energy. It is generally performed in the upper half of the bow, mostly starting up-bow, and should be practiced first in that manner. It must also be mastered, however, on the down-bow. Students trying to perfect this stroke generally make the mistake of lifting the bow too soon. The lift has to take place not at the end of the stroke just completed but so shortly before the beginning of the new stroke that the lifting and slapping down occur almost simultaneously. The whipped stroke has a quality of biting incisiveness. Its uses are many. It can be very effective when a note needs an accent and there is not time enough to pinch the string for a martelé attack."

I don't see why you would isolate and practise this stroke... You can just do it if your bow hand is good enough.

"Instead, the player uses very little bow in a quick detache, just below the middle of the bow. There is no time to lift the bow between strokes, nor is it necessary. The effect of hearing the "bounce" is an illusion created by the sharpness of the staccato attack, the quickness of the successive notes, and the full tonal quality of each note.

The discovery of the "fouette detache" as a valid substitute for sautille was a godsend for violinists, because some fast, loud, and percussive bouncing strokes shouldn’t leave the string."

Stein is referring to a different stroke that's played in the middle of the bow. Is this supposed to be played as a detache with a colle stroke to simulate the "pop" of sautille?

Nate B
Edited: July 12, 2019, 12:58 PM · Odd. I don't know who Paul Stein is, but at the risk of differing from a noted pedagogue, if he is one, the stroke described in that article is completely different from the fouette ("whipped") stroke I learned as a student. What he's describing sounds to me to be what we simply called "sautille" - a fast spiccato stroke where the stick bounces but the hairs do not quit the string.

[Edit: Well I looked up his youtube channel, and he sounds great! His bio says he plays in the LA Phil, so he certainly knows how to play the violin. :) It must just be one of those strange differences in linguistic traditions that one sometimes encounters.]

A self-correcting exercise for learning fouette (at least as my teacher taught it) is to play the first chord of the Mozart G major, up bow, from the air, at the point. I've never heard of doing successive fouette strokes, unless you had to play a lot of up-bow chords in a row.

Maximillian Tresmond
Edited: July 12, 2019, 1:00 PM · Paul Stein, he's a prolific blogger here. All around great writer. I asked him if he could stop over on this thread and explain the stroke in further detail.

Paul Stein
Edited: July 14, 2019, 8:01 PM · It's no surprise that fouetté is a confusing term. It literally means two very different things. Galamian used it to describe a very sharp, whip stroke, usually at the tip. It is used generally for one note at a time, certainly not in a group of many notes.

The fouette I am referring to describes, essentially, a sautille that doesn't consciously nor regularly rise above the string. It is highly effective in the Scherzo of the Schumann 2nd Symphony and many second violin parts in Mozart operas. I was pleased to find that two authors, Frank Spinosa and Harold W. Rusch, had defined the term on page 75 of The Artist's Studio for Strings-Bowing Development Studies (1989, Neil A. Kjos Music Company. 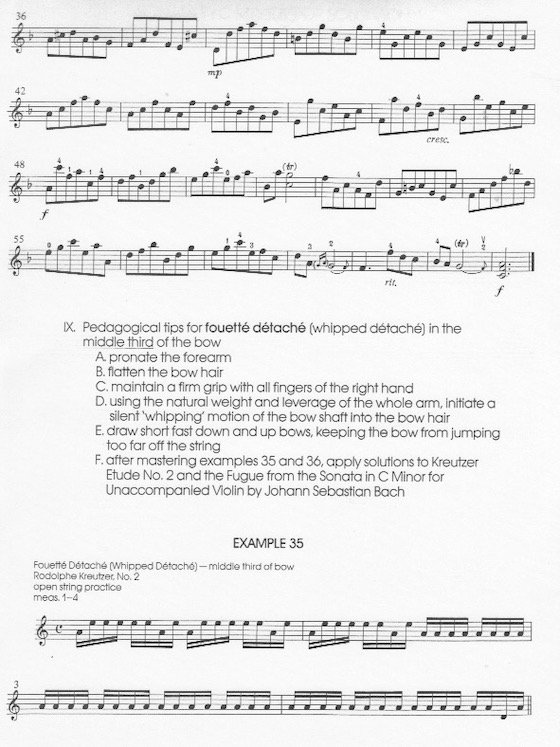 I have included the page describing fouette. The applicable description is:

D. Using the natural weight and leverage of the whole arm, initiate a silent "whipping" motion of the bow shaft into the bow hair.
E. Draw short fast down and up bows, keeping the bow from jumping too far off the string.

The reason Schumann's Scherzo benefits from staying into the string, as opposed to a pure sautille, is that it is virtuosic, it changes dynamics often, and it jumps around the four strings for several pages.The reason fouette is so effective is because it sounds like a sautille, but can maneuver much better. It can make thicker or lighter textures. it sounds like a sautille because the initial sound of each stroke is that of a snap, or a whip. That is essentially the beginning sound of a staccato, spiccato and sautille. What's often missing from a spiccato is the detache, or sostenuto sound that follows the snap. I made up a word to describe it: spiccache.

Fortunately, I found that these two men had used the word fouette, or else I would have tried to create a word myself. It's unfortunate that the word refers to two different strokes. I think the term son file has two very different meanings, but that's another story.

I'll try to download a good example of the Vienna Philharmonic under Bernstein playing Schumann Scherzo.
This is a much better example than I could have come up within my own demonstration. The tricky thing about watching them play is that it looks like a pure sautille. It's not. Herein lies the best thing about fouette: the fear of losing control, unnecessarily, with a sautille is replaced by common sense, control, and a lot of amazing articulations, colors, and dynamics.

One other thing, the bow IS bouncing much of the time. It can't help itself. There's even a neat effect of the string bouncing up and down, so that while the bow is staying close to the string, the string is bouncing below it. Same effect as a sautille!

Christian Vachon
Edited: July 12, 2019, 9:24 PM · Fouetté means to whip, but can also be translated as slapped. It originates from the old Franco-Belgian School, and essentially is produced often at the tip with a lift and slap before the stroke. Ysaÿe was said to use this stroke on all the up-bows in the Scherzo-Tarantelle by Wieniawski, which would be a remarkable feat. A more common passage where this would be employed would be the up-bows after the rests in the main theme of the last mvt of Saint-Saëns Concerto no. 3. As for example here by Joshua Bell: https://youtu.be/DZxwiABbock?t=1129

Fascinating! Thanks for that detailed explanation!

Adrian Heath
July 14, 2019, 3:30 AM · Indeed, Galamian was much influenced by the Franco-Belgian "School".
I confess that that is how I describe the "fouetté".

The stroke that Paul Klein describes so well I would call a "singing sautillé"?

Thanks so much for the description. I have tried and tried all weekend and just cannot seem to learn how to do this. Would it be possible to upload a YouTube videon on mastering this stroke?

Thanks again for the information and all the wonderful articles that you write.

Paul Stein
July 15, 2019, 11:03 AM · Sorry, Maximilian, but since I don’t do videos, maybe someone else will do it. Fouetté is almost the same as quick, short-lengthed detache. Press a little harder with the bow, and make sure the beginning of each stroke has the incisiveness of a crisp staccato. Keep volume and energy up.

I remember my teacher Broadus Earl taught fouetté without naming it that. For some passages, he taught a heavy spiccato that essentially did not leave the string.