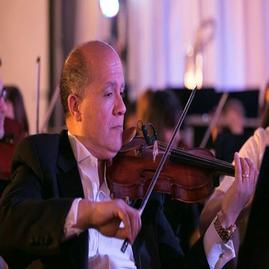 Wayman began studying the violin at the age of eight with Philip Teibel of the Buffalo Philharmonic Orchestra and participated in numerous regional and state wide orchestral music festivals. He was a member of the Greater Buffalo Youth Orchestra throughout High School under Pamela Gearhart and John Landis. He also performed with the New York State School Music Association (NYSSMA) All State Chamber Orchestra at the Concord Hotel in Lake Kiamesha, NY under the direction of Vytautus Marijosius of the Hart School of Music. After graduating from High School, he pursued a pre-medical curriculum at Oberlin College and was a member of the Chamber Orchestra directed by Robert Baustian. While at Oberlin, he toured the Southeastern U.S. with the Oberlin Choir and Chamber Orchestra directed by Dr. Daniel Moe.

He received a B.S. in Zoology and an MBA in Health Services Administration from Howard University. As an undergraduate at Howard, he was Concertmaster for three albums he recorded with the Howard University Jazz Ensemble. He has appeared as session violinist and soloist for numerous recordings including Donnie McClurkin, Herb Fame, Julia Nixon, and Richard Smallwood. He is also a member of “Strings for Christ," and Ars Nova Chamber Orchestra.

He was Concertmaster for “The Phantom of the DC Performing Arts Center” featuring mezzo-soprano Denyce Graves sponsored by Friends of Carter Barron Foundation for the Performing Arts in Summer 2007. He has been a member of "Soulful Symphony" led by Founder & Artistic Director Darin Atwater since its inception in February, 2000 and was a contractor with the Symphony from 2003-2010. He is currently Personnel Manager of the American Studio Orchestra (ASO) in Baltimore, MD. Wayman began serving as US Concert Manager for acclaimed Violinist Ji-Hae Park from Seoul, Korea in February, 2012. He performed at the Latino Inaugural 2013 at the Kennedy Center Opera House with the Pan American Symphony Orchestra (PASO) under the direction of Sergio Alessandro Buslje. PASO accompanied Raul Esparza, Juan Diego Florez, Rita Moreno, and Chita Rivera in honor of the presidential inauguration and Latino arts and culture. Wayman was coach, camp faculty member, and performer at Liya Music Camp-USA Summer, 2014 -2016. He was concertmaster and contractor for the "Concerts for Causes Orchestra" featuring Larry Graham and Graham Central Station at Strathmore Music Center Fall, 2016.

Wayman is Concertmaster of the McLean Bible Church orchestra. He is mentored by acclaimed virtuoso violinist Amy Beth Horman; Washington DC. He resides in Germantown, MD. He is available for private lessons in person and via Skype. Call (240) 988-5111 for details.
| Back to Top |