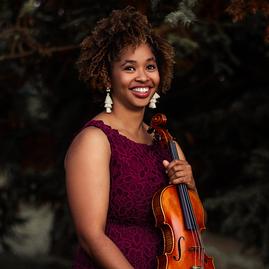 A native of Suffolk, Virginia, Stacey Sharpe began music at an early age when she enrolled in piano lessons at six years old and violin lessons at twelve years old. Among her teachers were Karey Sitzler, Tracy McDonald, Allegra Havens, and Molly Sharp. Stacey was a fourth-year graduate of the Norfolk Governor’s School for the Arts Instrumental Music Department where she studied violin and served as Concertmaster of the Orchestra. She also graduated as Valedictorian of her class at the Governor’s School for the Arts. Stacey has been very involved in her church, East End Baptist Church, where she performs and teaches piano, violin, and voice. She has also taught music in various settings, such as: Children’s Church for East End Baptist Church, Karey Sitzler’s String Chamber Music Camp where she was Co-Director, masterclasses, private lessons, and international mission trips to Trinidad, Panama, and Guatemala.

Stacey is currently pursuing her Master of Music degree in Violin Performance at Florida State University where she serves as a graduate teaching assistant to Dr. Shannon Thomas. Stacey is also the recipient of the prestigious Wilson-Auzenne Graduate Assistantship for Minorities. An avid performer, Stacey has served as Principal Second of the University Symphony Orchestra at Florida State University. She has also performed with professional ensembles such as the Tallahassee Symphony Orchestra, the Panama City Symphony Orchestra, and Sinfonia Gulf Coast. Passionate about educating the next generation, Stacey is also a Violin and Piano Instructor at Thomasville Road Academy of the Arts. In the future, Stacey will pursue her dreams of performing with a symphony orchestra or a chamber ensemble and educating the next generation of artists about the true beauty of music.