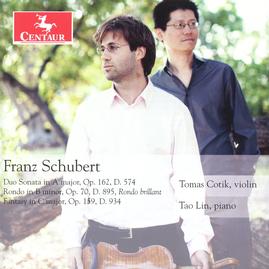 Hailed by Michael Tilson Thomas as "an excellent violinist," Tomas Cotik was a first-prize winner at the National Broadcast Music Competition in his native Argentina in 1997, and the winner of the Government of Canada Award for 2003-2005. An avid recording artist, Dr. Cotik is currently involved in more than a fourteen CD recordings for Naxos and Centaur Records, which have received over a hundred reviews and the highest praise from some of the best-known publications such as Fanfare, American Record Guide, Downbeat, and MusicWeb International. These recordings include Schubert’s complete works for violin and piano (nominated as recording of the year by Musicweb International), an album with Cotik’s own arrangements of music by Piazzolla (described by the critics as “among the very best”), a solo CD that includes a world premiere recording of original works by Franz Schubert and an upcoming release of Mozart’s 16 sonatas on a 5 CD set. He has worked extensively with producers such as Blanton Alspaugh and Judith Sherman and also produced four recordings himself. Cotik has performed with several internationally prominent conductors such as Michael Tilson Thomas, Valery Gergiev, Roberto Abbado, Yakov Kreizberg, Marin Alsop, Stephan Deneve, Roger Norrington, and Robert Spano in notable venues such as Carnegie Hall.

Tomas Cotik has performed hundreds of recitals and chamber music concerts across the globe. Since 2011, he is a member the Cotik/Lin duo. He was also a member of the acclaimed Amernet, Delray, and Harrington string quartets. He was a rotating concertmaster with the New World Symphony and a leader with various other orchestras in the United States and abroad.

Tomas Cotik earned a Doctor of Musical Arts degree from the University of Miami. He holds Bachelor and Master of Music degrees from the Freiburg University of Music in Germany and an Artist Diploma from the Glenn Gould School in Toronto. He has worked closely with artists such as Joseph Kalichstein, Franklin Cohen and members of the Cleveland, Miami, Pro Arte, Vogler, Vermeer, Tokyo and Endellion string quartets.

Committed to passing on his passion for music, Dr. Tomas Cotik was appointed Assistant Professor of Violin at Portland State University in 2016. He previously taught at West Texas A&M University, Florida International University, and at the University of Miami’s Frost School of Music.