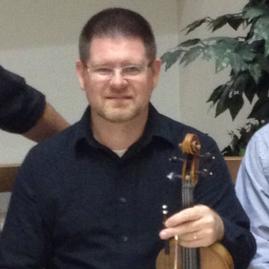 I Graduated from UW Madison in 1993 with a Bachelor's degree in Music Education. My principal teacher at UW Madison was Vartan Manoogian. I also had some lessons with Norman Paulu. During a residency I also studied with Lorand Fenyves(former concertmaster of the the Isreal Philharmonic). While there I also: attended the master classes of Rostislav Dubinsky, The Julliard Quartet, The Beaux Arts Trio, and Mitchell Lurie; worked with notable 20th century composer William Kraft gave midwest premiere of one of his works and premiered works at the national 20th century composers convention.
During the summers of 91-93 I studied with Shmuel Ashkenasi. In 1993 I accepted a post as an Artist in Residence with the Dubuque Symphony and Dubuque Community Schools. I also served on the violin faculty of The University of Dubuque for one year. As artist in residence I performed with Mark O'Connor, Ko Iwasaki, Jennifer Koh, and the Ying Quartet. In the summer of 1994 I studied with Kato Havas.
In 1994 I accepted a position with the Davenport Schools, where I have been ever since. I teach 4th-8th grade students in the public school system. Among my private students, are many of the top players in the local high school orchestras and youth symphonies including students that have placed in national violin competitions.
I am active as a recording engineer and producer and am featured as a guest artist on numerous recordings locally in the midwest and Canada. As a guest artist with the band "Track a Tiger", my playing was featured on the Terrel Owens Show on VH1. I have my own recording studio and build custom microphone preamps for studios from New York to LA. I have served as principal violinist in the Josh Duffee Orchestra(1920's-30's jazz) and the violinist and co-leader of The Hot Club of Davenport(a Jazz Manouche ensemble dedicated to the music of Django Renhardt and Stephane Grappelli). Having recently released a CD at the 40th Bix Jazz Festival in 2011. At that festival the group performed with reknowned New York clarinetist Dan Levinson. Other notable Jazz musicians I have performed with include Vince Giordano, Andy Stein, Jon-Erik Kelso, Bill Allred, and The New Wolverines, guitarist Dani Rabin and saxophonist Danni Markovitch (of Marbin and the Chicago gypsy jazz Allstars) I have also collaborated and performed with Russian 7 string guitar virtuoso Vadim Kolpakov, multi instrumentalist Oliver Rajamani, Dr. lalitha Muthuswami (Carnatic violinist), and tabla master Subrata Bhattacharya. Since 2013, I have been a regular presenter on string technique at the IMEA all state music convention at Iowa State University in Ames. In July of 2017 I am attending an improvisation workshop in New York, at Carnegie Hall.