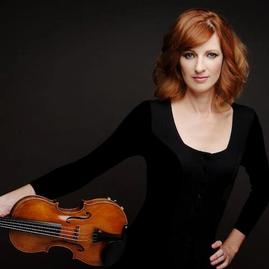 After hearing Scheherazade at an early age, Holly Mulcahy fell in love with the violin and knew it would be her future. Since then, she has won multiple tenured positions in symphonic orchestras from Richmond to Phoenix and has performed on a variety of domestic and international tours including the Washington National Opera Japan tour under the leadership of Placido Domingo and the 2012 Carnegie Hall appearance with the Nashville Symphony Orchestra.

She spends her summers at the celebrated Grand Teton Music Festival where in addition to performing in the violin section and assistant principal second, Holly volunteers as an active chamber musician.

When not performing, Holly is either hiking, cooking, or running her small non-profit which takes new music and composers into the prisons.