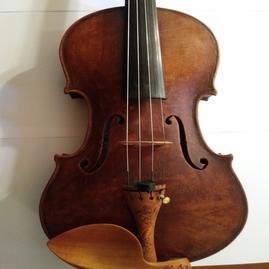 Steven Lovinger has become a well-known recitalist in the Olympia, WA area, performing with pianist Robert Jorgensen to much audience acclaim. Their programs have included numerous works from the Sonata, Concerto and Virtuoso/Encore repertoire, including the Beethoven, Brahms, Elgar, Mozart, Strauss, and Franck Sonatas; the Mozart, Beethoven, Mendelssohn, Prokofiev, Paganini, Saint-Saëns, Lalo, Tchaikovsky, Sibelius, Brahms, and Bruch concerti; and numerous encore pieces from Kriesler, Heifetz, Auer, Sarasate, Wieniawski and others.

As a scholarship student at the University Of Denver Lamont School Of Music, he studied with James Maurer and Linda Wang. He played in Master Classes for Brian Lewis and James Ehnes. He was honored for his chamber music performance in the Smetana Piano Trio, as well as numerous recitals. Upon receiving his Bachelor of Music degree in June, 2007, the Chairman of the String Department, Richard Slavich, wrote, "Steven is a very big natural talent, playing with a flair and panache very seldom encountered; he reminds me of the legendary violinists Oistrakh and Ricci, big, burly Romantics with the instrument, a unique violin personality."

Steven began violin at the age of seven with Ronald Mutchnik in Baltimore, MD and continued his studies with Helen de Pastel Pagels in Olympia, WA when he was 11. He won the Concerto Competition of the Capital Area Youth Symphony with his performance of the Mendelssohn Violin Concerto in 2002. He also achieved superior ratings in music competitions such as the Seattle Young Artists Competition for both his recital and concerto where he was given the rare privilege of playing on the “Red Mendelssohn” Stradivarius.

Developing in classical improvisation, Steven formed the Mandala Duo with classical guitarist Dan Cosley. They have released a CD, The Mandelbrot Set.

Steven performs on a beautiful 1998 Michael Fischer violin, made like a 1742 Giuseppe Guarnerius del Gesu.