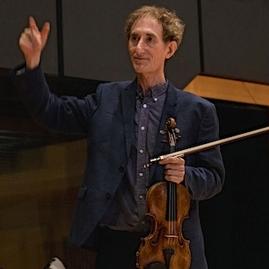 Simon Fischer is recognised as one of the pre-eminent musicians of our time, enjoying a distinguished and wide-ranging career as a performer, educator and recording artist.

As a recitalist he has performed in the UK, the USA, Europe and Australia, at venues including the Wigmore Hall and the Purcell Room. Alongside standard repertoire he delights audiences by performing his own transcriptions of famous works by composers such as Tchaikovsky, Mendelssohn, Johann Strauss, Rossini and Purcell. For many years Simon has played duo recitals with his father, the pianist Raymond Fischer. Amongst UK and foreign touring projects they have recently played the three Brahms Sonatas in a live broadcast from Sydney, Australia. These Sonatas have also been recorded on CD, receiving high praise in Gramophone Magazine.

Simon Fischer has frequently played as soloist or leader/soloist with major orchestras including the Philharmonia, Royal Philharmonic, BBC Philharmonic, Scottish Chamber and the Ulster Orchestra, working with celebrated conductors such as Vladimir Ashkenazy, Sir Charles Groves, Richard Hickox, Andrew Litton, Sir Yehudi Menuhin, Yan-Pascal Tortelier and André Previn. As a chamber musician he was leader of the Chamber Group of Scotland, with whom he gave many broadcasts and concerts of contemporary music, and worked closely with composers such as Sally Beamish and James MacMillan. He has directed the European Union Chamber Orchestra on several tours including to Korea, China and Ireland.

Simon is recognised as having a place amongst the world's elite teachers. He is a professor at the Guildhall and Yehudi Menuhin Schools, has held positions at two other specialist music schools, Wells Cathedral and the Purcell, and for 15 years was a visiting professor at the Royal Scottish Academy of Music. Having studied in London with Yfrah Neaman, and in New York with Dorothy DeLay, Fischer's approach unites the best elements of the French, Russian and American violin traditions.

Fischer's published work greatly influences the teaching of the violin. Having written for The Strad magazine since 1991, his monthly articles have attracted a worldwide following. Published by Edition Peters, his technique books Basics and Practice (translated into Korean, Italian and German), Scales and The Violin Lesson, and the DVD The Secrets of Tone Production, have become standards on many continents. His book and DVD Warming Up, was described by The Strad magazine as "23 pages of pure technical gold". In 2014 Simon Fischer was awarded the European String Teachers Association prize "In celebration of a lifetime contribution to String Teaching." He recently completed a book on double-stop technique called Double Stops.

In conjunction with his playing engagements he frequently gives masterclasses, workshops and leads residencies. Recent residencies have taken place in the USA, Holland, Italy, Norway, Ireland, Hong Kong, Germany and Australia. Simon Fischer plays a violin by Peter Guarnerius of Venice from c.1732.