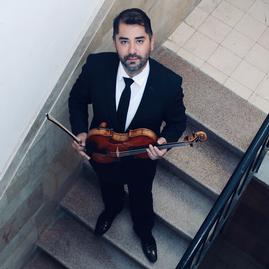 Violinist Mr. Ruda Alves was born in Sao Paulo, Brazil. At the age of 8 he began taking violin lessons with Marcia and Elisa Fukada. He moved to Israel after being awarded a scholarship by the Vitae Foundation and later by the National Arts Foundation. In Israel he became a student of Chaim Taub and later studied with Hagai Shaham at the Buchmann-Mehta School of Music, Tel Aviv University, where he received his Bachelor and Master Degrees.

His long and fruitful collaborations with various and exceptional artists contributed to a unique style that fuses the Jewish violin tradition with the lightness and balance of Brazilian music. Alves has participated in numerous masterclasses with internationally renowned soloists and professors including Pinchas Zukerman, Erik Friedman, Glenn Dicterow, Boris Belkin, Sidney Harth, and Zakar Bron.

For several seasons he played at the Brazilian Symphony Orchestra, and was a guest concertmaster of many Brazilian orchestras including the Sergipe Symphony, Barra Mansa Symphony, and Mato Grosso State Orchestra. In 2007 Mr. Alves was honoured by the State of Mato Grosso ´s Legislature with a Motion of Congratulation due to “his brilliant work done for the development of the musical culture in the State of Mato Grosso, Brazil”.

Ruda Alves has played under the batons of some of the greatest conductors of our time, such as Zubin Mehta, Lorin Maazel, Semyon Bychkov, Kurt Masur, Eiji Oue, Ariel Zuckermann, Ivan Fischer, Manfred Honeck, Gianandrea Noseda, Louis Langrée, among others.

Recent performance highlights include concerts with Israel Chamber Orchestra under the baton of Ariel Zuckermann and the Israeli premier of “The Way to Sion”, by the Israeli composer Joseph Bardanashvili.

Today, Alves splits his time between his position as Associate Concertmaster at The Israel Chamber Orchestra, chamber music performances, and his private studio, where he prepares the next generation of Israeli violinists.

“Throughout this special concert, I was especially impressed by one of the musicians,
the concertmaster Ruda Alves.
He is a member of the orchestra and came from Brazil,
one of the concertmasters that gave me chills”
- Aharon Schatzkin -