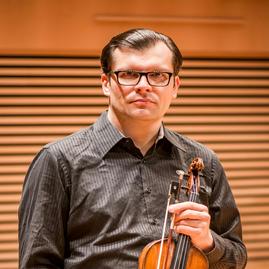 Prior to his MGPO appointment, Rommel Fernandes was based in Chicago, USA where he maintained an active performing and teaching career. He has been a guest musician at MusicNOW, the Chicago Symphony Orchestra's contemporary music series. He has also played in live broadcasts for WFMT (Chicago's fine arts radio station), as well as in solo performances alongside Jacques Israelievitch (former Concertmaster, Toronto Symphony Orchestra) and in collaboration with Chicago-based Fifth House Ensemble. As a Principal Second Violin and Regular Member of the Civic Orchestra of Chicago, he worked with major conductors and soloists including Daniel Barenboim, Pierre Boulez, Sir Andrew Davis, Christoph von Dohnányi, Charles Dutoit, Christoph Eschenbach, Gidon Kremer, Lorin Maazel, Andris Nelsons, David Robertson and Robert Spano.

Critically acclaimed for his "superb playing and aristocratic musicianship" as well as for his "high spirited, modernist, yet elegant reinvention" of the traditional repertoire, he also stands out as a performer of contemporary music. Recent concert engagements have included world premieres of works by Douglas Boyce (Floruit Egregiis, for violin and cello) and Silvio Ferraz (Partita II, for solo violin), as well as Brazilian premieres of works by Pierre Boulez (Anthèmes I, for solo violin) and Mario Mary (Aarhus, for violin and electronics), among others.

As a three-time Fellow at the Tanglewood Music Center (USA), Rommel Fernandes was Concertmaster of the TMC Orchestra under Bernard Haitink and James Levine, and won the chance of performing as a guest musician with the Boston Symphony Orchestra. Current and former members of the American, Cleveland, Concord, Juilliard and Muir String Quartets also coached him in chamber music at Tanglewood. He was also a two-time participant of the Lucerne Festival Academy (Switzerland), where he received coaching in 20th century and contemporary chamber music from members of the Ensemble Intercontemporain and of the Arditti Quartet. In March 2016, he was one of 114 Festival Academy alumni invited back to Lucerne to participate in a Memorial Concert for Pierre Boulez.

Rommel Fernandes earned Doctor of Musical Arts and Master of Music Degrees in performance, both with Honors, from Northwestern University (USA) in the violin class of Gerardo Ribeiro. He also earned a Bachelor's Degree in performance from the São Paulo State University, in his native Brazil, as a student of Ayrton Pinto (a former member of the Boston Symphony Orchestra and of the New England Conservatory faculty). He has also received coaching from violinists Andrés Cárdenes, Marylou Speaker Churchill, Viktor Danchenko, Sándor Devich, Leonard Felberg, Pamela Frank, Marcello Guerchfeld, Sidney Harth, Alberto Jaffé, Malcolm Lowe, Ruggiero Ricci, Jerrold Rubenstein, Kurt Sassmanshaus, Joseph Silverstein, Leon Spierer and Almita Vamos. He has performed as a soloist with the São Paulo State Symphony Orchestra as the winner of the orchestra's Young Soloists Competition.

Rommel Fernandes has served as a faculty member at North Park University in Chicago. He currently teaches privately and he is frequently invited to give masterclasses on violin solo, chamber and orchestral repertoire, as well as to participate in Master's and Doctoral committees. He is faculty at Academia Filarmônica, the MGPO's newly established orchestral academy.

He performs on an Italian violin from late 18th century, attributed to the Gagliano family, with a French bow made in the 1810s by Jacob Eury.