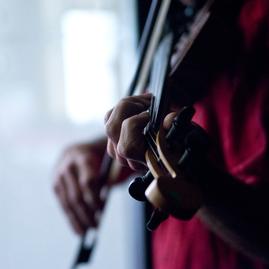 By turns nocturnal, funky and cinematic, the music of composer and violinist David Schulman has been described as “mysterious and beautiful” by The Washington Post. A 2018 Music Fellow of ART OMI, David wrote and recorded the theme music for NPR’s "The Big Listen” and BBC’s “Americana.” He’s composed numerous scores for modern dance, several performed live at the Kennedy Center. These include commissions from PearsonWidrig DanceTheatre and the Oregon Ballet Theatre.

David in 2019 launched the ARTSOUNDS series at the Hirshhorn Museum, improvising live scores to exhibits by renowned contemporary artists. His album ANHINGA was described by World Music Report as “exceptionally lyrical...a vivid slice of life that traverses the musical topography of the Americas.”

David also created and produced the award-winning “Musicians in their own Words” public radio series (NPR, APM, PRI). His obsession with the sound of iconic jazz violinist “Stuff” Smith’s in late 2017 led him to Stuff’s favorite violin, which had gone unplayed for 50 years — a story told in a cover story for Strings magazine and in his radio documentary “Nobody Swung Harder,” short-listed for the 2018 Prix Italia. His music can be found at quietlifemotel.com