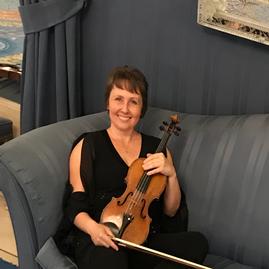 Yova Milanova starts very early her violin studies with her grandfather Trendafil Milanov. She takes her first tour when she was six years old as soloist with a chamber orchestra and plays her first solo recital at 10 years. At 11 the plays her debut in the Queen Elizabeth Hall (London) and records various pieces with symphony orchestra. She continues studies with her mother Stoika Milanova and later with André Gertler in Brussels and Walter Verdehr at Michigan State University in Lansing, Michigan, USA, graduating with Honors in the Lubomir Pipkov National School of Music, Pancho Vladigerov National Academy of Music (both in Sofia, Bulgaria).

She was prize winner in the International Music Competition Maria Canals in Barcelona, Spain, and the Cobb Award Scholarship for her graduate studies at Michigan State University. Between 2013 and 2016 she was artistic director at Grace Notes Music Studio in Baton Rouge, Louisiana, USA. She has frequently performed as soloist in Bulgaria, Portugal, France, Hungary, Germany, Spain, Holland, Venezuela and the USA.

In 2011 she had her Carnegie Hall debut (New York, USA) playing music of the Greek composer Dinos Constantinidis.

All through her teaching career she has been a firm promoter of the Milanov Method.
She lives in Madrid.