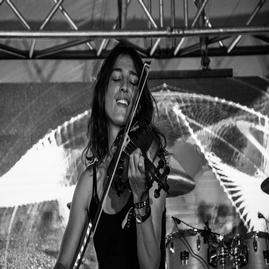 Luca Hart started playing the piano at age 6, but when she heard solo violin music for the first time, she decided to switch to violin at age 9. She continued with music at school, taking part in numerous cultural clubs, string ensembles and symphony orchestras. As part of two seperate exchange programs she was priviledged to travel to Budapest, Hungary, Slovakia, Germany, and Bratislavia to perform as violinist with her school choir, visiting incredible cathedrals and playing for international audiences. She completed her grade 8 practical violin exam through ABRSM in matric.

Whilst studying a Bachelors degree in Music Technology - for which she obtained a partial bursary - Luca was a member of the Stellenbosch Symphony Orchestra as well as the Camarata ensemble, which accompanied Joshua Bell for a range of performances in South Africa. She also started her own alternative instrumental band with Flamenco guitarist Matthias Silbernagl, which won Maties Talent in 2011.

Since graduating with honours (BA Music Tech) in 2012, Luca has been performing very successfully as a session violinist for numerous alternative bands, whilst also composing, marketing and performing her own music. She currently plays electric violin for SAMA-award winning instrumental pop trio Sterling EQ, as well as sings and plays for Sunset Espresso, a violin & saxophone duo for corporate functions and weddings. Her own music is characterized by epic virtuostic violin passages over dance music, which she writes and produces herself.

Luca has been teaching the violin and music theory since 2012.