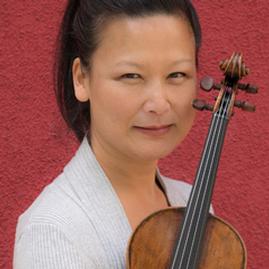 Lina Bahn is a violinist who has a keen interest in collaborative and innovative repertoire, and has been called “brilliant” and “lyrical” by the Washington Post. Her most recent publication of Mean Fiddle Summer on the Naxos Label was hailed by the ClevelandClassical.com, “From start to finish, the violinist demonstrates her adroit technical facility, kaleidoscope of colors, and consummate musical taste.”

As a committed educator, she was on the faculty at the University of Colorado-Boulder from 2008-2015, and has taught masterclasses and lessons throughout the world, including those at the Yong Siew Toh Conservatory in Singapore, the Sydney Conservatory, Hong Kong University, Renmin University in Beijing, among others. She was on the faculty of the Sierra Summer Academy of Music from 2001-2013, the Institute of the Palazzo Rucellai in Florence, Italy, and currently teaches during the summers at the Green Mountain Chamber Music Summer Festival and the Borromeo Music Festival in Altdorf, Switzerland.

Intrigued by the relationship between art and social context, Bahn is a founding member of MoVE (Modern Violin Ensemble). MoVE is an innovative quartet of four violinists, committed to commissioning music and starting a canon of repertoire for this relatively unknown instrumentation. She was a member of the award-winning Corigliano Quartet from 1998-2010, with performances at Carnegie Hall, Alice Tully Hall, the Library of Congress, Ravinia, and which earned the ASCAP/CMA Award for Adventurous Programming. In 2007, their Naxos Records recording was selected by The New Yorker magazine as one of the year’s “Best 10 Recordings” and was lauded by the Strad Magazine for their "abundant commitment and mastery". Her commitment to new music as violinist with the VERGE Ensemble of the Contemporary Music Forum in Washington DC lasted for fourteen years, while it was the resident ensemble of the Corcoran Gallery of Art. As a soloist, she has made appearances with the Chicago Chamber Orchestra, The Chicago Symphony Orchestra, La Orquesta Sinfonica de la Serena (Chile), and the Malaysian National Symphony Orchestra, the Fort Collins Symphony, and Pro Musica Colorado Chamber Orchestra.

Bahn studied with Dorothy DeLay at the Juilliard School for her undergraduate degree. She completed her Masters degree as the recipient of the Jane Bryant Fellowship Award under the tutelage of Paul Kantor. Her Doctorate in Music is from the Indiana University, where she was an Associate Instructor and studied with Miriam Fried and Paul Biss. Dr. Bahn’s early training in Chicago started with Lillian Schaber and she finished her high school years under the guidance of Roland and Almita Vamos.