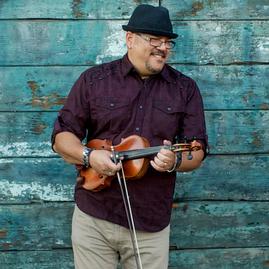 Jesus Florido has established himself as a very versatile musician. His training in the classical tradition has given him the perseverance and work ethics that are needed to succeed in the music world. In the meantime, he also has studied Afro-Cuban, Jazz, Rock, and Fiddle music, which - combined with his Latin American roots - has produced an eclectic vision of music interpretation.
His main teachers were Eligiuz Stoinsky, Lawrence Shapiro, and Davis Brooks. He also took lessons from Joseph Gingold, Margareth Pardee and Dorothy DeLay.
His influences are as diverse as one can imagine: names like Bach, Beethoven, Mozart, Grapelli, Hendrix, Ponty, Shankar and Santana are rarely placed in the same sentence, but for him it is an everyday combination.
He has bridged the acoustic and electric violin worlds by respecting the capabilities of each one of them and applying them accordingly. American fiddler Mark O'Connor recognized him when he invited him to teach Latin-style fiddling and improvisation at his camps in Nashville and San Diego. He has appeared on CBS Sunday Morning as part of Mr. O'Connor's line-up of faculty/artists.
His playing can be heard on many commercial recordings. His latest include such artists as Nima & Merge, Dan Hicks and the Hotlicks, Gary Hoey, Voyeur, Omar Torrez, Delarge, Hattler, and Nicholas Gunn. He has shared the stage with a wide variety of artists from Zubin Metha, Pinchas Zukermann and Itzhak Perlman to Whitney Houston, Moody Blues, Robert Plant and Jimmy Page among many others.
Sharing his music through teaching is an essential part of his daily life. As a founding member of the National System of Youth and Children Orchestras in his native Venezuela he started teaching at a very young age as they do on that program. He has taught in Brazil, Spain, Canada, Germany, Austria, Belgium, France and the US. "Music has to be part of every child's development in the world," he states.
With his debut, Heading North, Jesœs introduces a compelling artistry balanced on a fine axis of musical virtuosity and pure heart. "This album came about from what is not out there from an instrumental point of view," he explains. "Jazz, rock, classical, Latin -- my album is a true melting pot."
With his violin as a compass, Jesœs Florido heads toward a limitless musical horizon with a stunning solo debut, Heading North.
*Now based between Los Angeles, CA and Vienna, Austria. Mr. Florido is available for Workshops, Clinics or Masterclasses customized for your individual needs*