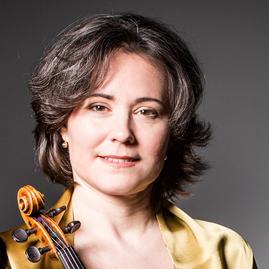 Since winning the Gold Medal at the prestigious International Violin Competition of Indianapolis in 1998, Judith Ingolfsson has established herself worldwide as an artist of uncompromising musical maturity, extraordinary technical command and charismatic performance style.

A native of Iceland, Ms. Ingolfsson has been a guest soloist with many of the world’s leading orchestras including the Philadelphia Orchestra, Saint Louis Symphony, National Symphony (Washington, DC), Royal Chamber Orchestra of Tokyo and Budapest Philharmonic, with whom she also recorded the Tchaikovsky Violin concerto on the BPO Live Label. A regular guest on many of the great stages including Carnegie Hall, the Kennedy Center, Konzerthaus Berlin and Tokyo Metropolitan Art Center, she was named “Debut Artist of the Year” by National Public Radio’s “Performance Today” in 1999. In 2001, her debut CD on Catalpa Classics was awarded the 2001 Chamber Music America/WQXR Record Award.

Together with the pianist Vladimir Stoupel, Judith Ingolfsson performs regularly as the Ingolfsson-Stoupel Duo. They serve as Co-Artistic Directors of the festival “Aigues-Vives en Musiques” in southern France, founded in 2009. Their first joint recording, featuring the music of Simon Laks, was released on the EDA label in 2010. Their critically acclaimed release on the AUDITE label including works of Stravinsky and Shostakovich received a 2013 ICMA nomination.

A graduate of the Curtis Institute of Music in Philadelphia and the Cleveland Institute of Music, her main teachers included Jascha Brodsky, David Cerone and Donald Weilerstein. Prior to her triumph at the Indianapolis Competition, Ms. Ingolfsson was also a prizewinner at the Concert Artists Guild Competition in New York City and the Paganini International Violin Competition in Genoa, Italy. She is currently Professor of Violin at the State University of Music and Performing Arts Stuttgart. She performs on a Lorenzo Guadagnini violin, crafted in 1750.