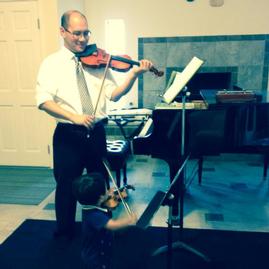 GENE WIE appears internationally as a conductor, chamber musician, and educator, dividing his time equally between the classroom and concert stage. His performances on violin, viola, clarinet, and saxophone have taken him across the United States, Canada, Europe, Asia, and the South Pacific. In 2020 he concluded a fifteen-year tenure as Music Director of the Community Youth Orchestra of Southern California, and along with a move to the east coast of the United States, is now the Director of Orchestras at Choate Rosemary Hall in Connecticut where he also teaches Chamber Music and Music History, and co-directs the Summer Music Festival with his partner Chika.

In addition to his work in music performance and education, Gene has taught Computer Science since 2008, including AP "A" and Principles, Introductory Programming in Python, and Honors level courses in Software Engineering. He mentored a student team that innovated a 3D-printed prosthetic to empower a student with physical challenges to play the violin, and previously worked in the industry as a software developer, technical writer, and systems builder.