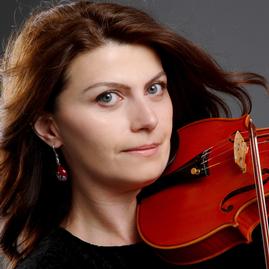 Born in Yerevan, Armenia, Gayane Bareghamyan began her musical studies at an early age. She attended the Alexander Spendiarov Specialized Music School, majoring in violin. Gayane continued her musical education at the Romanos Melikian Music Collage. After four years of studies at the collage, she went on to study at the Komitas State Conservatory of Armenia with the renowned violinist and national artist of the Republic of Armenia Victor Khachaturian.

She attained a high level of virtuosity and musicality which led her to be appointed as the Concertmaster of the Conservatory Symphony Orchestra, a position she held for four years. In June 2000, she was awarded her Artist Diploma in Violin Performance from the Komitas State Conservatory of Armenia.

In 1997, Gayane was a finalist at the Nationals Chamber Music Competition held in Yerevan, and in 1999 she joined the National Chamber Orchestra of Armenia. As part of the orchestra she has performed both within Armenia and Artsakh as well as abroad including USA (New York, Los Angeles, San Francisco, Fresno), Switzerland, United Kingdom, UAE, Lebanon, Cyprus, Greece. In 2002 Gayane immigrated to Canada and has since performed with various orchestras including Toronto Philharmonia, Sinfonia Toronto, Koffler Chamber Orchestra, Oshawa-Durham Symphony and as a soloist with the York Chamber Orchestra. Gayane has been performing in a string quartet. She is also devoted to teaching and preparing her students for Royal Conservatory of Music examinations. Gayane performs on 2014 Hratch Armenious and 1759 Michel Angelo Bergonzi violins.