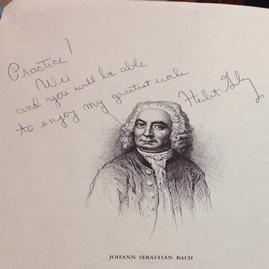 I had about 10 years of private lessons during my childhood and adolescence, 5 of which was with a noted student of Josef Gingold. I returned, in my 40’s, to the instrument in August 2016 after 25 years.

The words of encouragement in the nearby photo, written on the inside cover of my solo Bach, were received over 30 years ago from Herbert Greenberg (concertmaster of the Baltimore Symphony in the 80’s and 90’s). I was quite moved upon seeing those words again in the summer of 2016......the lost dream of my youth still finds so many ways to reach me all these decades later.