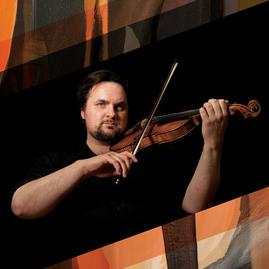 Dan Flanagan currently serves as Concertmaster of the Sacramento Philharmonic and Opera, Concertmaster of the Modesto Symphony, Concertmaster of West Edge Opera, Concertmaster of Opera Paralle´le, and Instructor of Violin at University of California, Berkeley. Described as a “stellar musician” (Nevada Reviews), he has been praised for his “exquisite tones” and “forthright brio” (Sacramento Bee), and his “violin... solos were excellent” (San Francisco Classical Voice).
A dedicated orchestral player, Flanagan has performed as concertmaster with the Oakland Symphony, Santa Rosa Symphony, California Symphony, California Musical Theater, Festival Opera of Walnut Creek, Symphony Silicon Valley, Merced Symphony and Symphony Napa Valley. He performs regularly with the San Francisco Opera and Ballet and records film and television soundtracks with the Skywalker Symphony Orchestra. Frequently featured as soloist with the Sacramento Philharmonic and Modesto Symphony, Flanagan has also performed with the American River Chamber Orchestra, Bear Valley Symphony, Reno Baroque Ensemble, UC Davis Symphony, and the Adelphi Chamber Orchestra.
As a chamber musician, Flanagan has performed with the Chamber Music Society of Sacramento, the Oregon Bach Festival, Earplay, Melody of China, Midsummer Mozart Chamber Players, Gold Coast Chamber Players, and has collaborated with pianists Leon Fleisher and Jon Nakamatsu. A founding member of the Farallon Quintet, he has commissioned and premiered numerous works, several of which can be heard on their CD, “Farallon Quintet Originals.” As a member of the Eco Ensemble, he performs regularly at Cal Performances, performed at La Biennale in Venice, Italy, and was featured in Strings Magazine.
In addition to teaching at University of California, Berkeley, Dan was Lecturer of Violin at University of California, Davis, from 2007 to 2017, and in 2008, Dan founded Sacramento School of Music, where he served as Director and Instructor of Violin until 2014.
Early studies were in New Jersey and New York City, followed by high school at Interlochen Arts Academy. He holds a Bachelor’s Degree from the Cleveland Institute of Music and a Master’s Degree from the University of Oregon, where he was a Graduate Teaching Fellow. His teachers include Linda Cerone, Charles Castleman, Lewis Kaplan, Hal Grossman and Fritz Gearhart. Flanagan plays on a violin made in 1840 by JB Vuillaume, once owned by the celebrated American virtuoso, Albert Spalding. When he’s not teaching or performing, Dan spends his time composing and buying paintings by French Impressionists and contemporary Californians.
danflanaganviolin.com