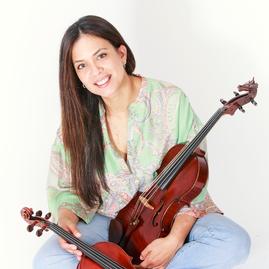 Prior to her arrival in New York, Ms Rojas was a member of the Simon Bolivar Symphony Orchestra-Venezuela, touring with them to Europe, Asia, and America, and recording master pieces of Latin American composers for Dorian Records. Ms Rojas was also the assistant to concertmaster in the string orchestra Jóvenes Arcos de Venezuela.

Ms Rojas attended the 1990 and 1996 summer festivals held by the Latin American Violin Academy, the 1997 Quartet Fest by the Penderecky Quartet in Waterloo-Canada, and was a scholarship recipient for the 1999 Killington Music Festival in Vermont.

In 2006, Ms. Rojas gave her New York Recital Debut at the Weill Hall of the Carnegie Hall, as one of the winners of the Special Presentations Awards of Artists International Presentations 33rd Annual Auditions.

While in New York Ms Rojas participated extensively in the performance of contemporary music with guitar player Sylwia Kloc (Colloquio di Corde) and pianist Wei-Hsien Lien. Ms Rojas also held a successful private teaching studio, and was faculty member at I Bach Arts and Music School, and the United Nations International School - Queens Campus. Since 2010, she is the String Orchestra and IB Music teacher at the Carlucci American International School of Lisbon, in Portugal.

She is married to Alan Crocker, and along with their son Kai and dogs, they make beautiful Sintra their home.