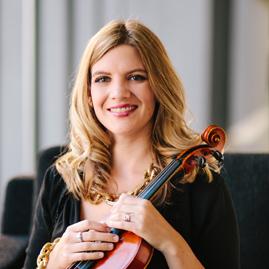 Ashley Rescot is a professional violinist, teacher, writer, and Fulbright Scholar. She is passionate about music, pedagogy, family, faith, and language. Her music group, Uptown Violins, is comprised of her mother and four sisters. They specialize in mashups that fuse classical music with other genres. Ashley writes a blog on all things violin-related. She is currently working on a music novel. Stay tuned!

At the age of two, Ashley began violin under her mother’s tutelage. To this day, performing with her mother and four sisters remain her fondest childhood memories. Her senior year in high school, Ashley served as concertmaster of her youth symphony in Kansas and won the youth talent concerto competition with Saint-Saëns' Violin Concerto in b minor, 1st movement, which she played as a solo with the orchestra. For college, she moved to Texas and received a Bachelor of Music in Violin Performance and minors in French and English.

In addition to violin, Ashley developed a passion for French, especially French music. She spent a year abroad in Paris, France as a Fulbright scholar where she taught English and collaborated with local musicians. The experience opened her eyes to another culture, which influenced her perspective as both a creative artist and pedagogue.

She returned to the Midwest to teach collegiate French language courses and earn a Master of Arts in French literature. After graduation, she moved to the greater Chicago area where she taught French at a regional university and grew her private violin studio. She performed a faculty chamber recital entitled “An American Taste of Paris,” first in the US and then in Paris. The recital featured several French composers, as well as the premiere of a contemporary work written for the occasion.

Today, Ashley loves to teach her private violin studio, perform with family and friends, and write about all things music and French. She is a member of Uptown Violins and Blackwater String Ensemble, as well as an active musician at her church. As a veteran teacher, she enjoys passing on her love of music and language to the next generation.