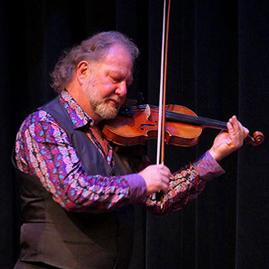 Alasdair Fraser is one of the greatest carriers of the Scottish fiddle music tradition, a fiddler whose warmly expressive playing, mastery of his instrument and deep understanding of his native music as a venerable and continually evolving art is an inspiration to generations of musicians on both sides of the Atlantic. For over 30 years Fraser has run highly influential music camps in the US, Spain, Australia and in his native Scotland. For over 20 years he has toured extensively as a violin/cello duo with cellist Natalie Haas, playing their own compositions as well as traditional music arranged specially for these two instruments. They have recorded 5 CD's together and are currently working on a sixth, to be released in the fall of 2020.