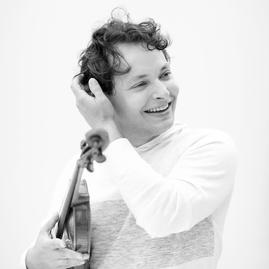 With a “dark-hued tone and razor-sharp technique” (The New York Times), Russian-American violinist Yevgeny Kutik has captivated audiences worldwide with an old-world sound that communicates a modern intellect. Praised for his technical precision and virtuosity, he is also lauded for his poetic and imaginative interpretations of standard works as well as rarely heard and newly composed repertoire.

Highlights of Yevgeny Kutik’s current season include his South African debut with the Cape Town Philharmonic Orchestra, performing Wieniawski’s Concerto No. 2, as well as debuts with the Dayton Philharmonic Orchestra and the Asheville Symphony, and performances with the Duluth Superior Symphony Orchestra, Springfield Symphony Orchestra (MA) and Springfield Symphony (MO). Highlights of his recitals this season include the world premiere of Arioso, a new work written for him by Michael Gandolfi, at National Sawdust in New York and a performance at Milton Academy’s Gratwick Concert with Edwin Barker, double bass, and members of the Boston Symphony.
Yevgeny Kutik’s 2014 album, Music from the Suitcase: A Collection of Russian Miniatures (Marquis Classics), features music he found in his family’s suitcase after immigrating to the United States from the Soviet Union in 1990, and debuted at No. 5 on the Billboard Classical chart. The album garnered critical acclaim and was featured on NPR’s All Things Considered and in The New York Times. His 2012 debut album, Sounds of Defiance, also on the Marquis label, features the music of Achron, Pärt, Schnittke, and Shostakovich. Funded in large part by a Kickstarter campaign initiated by Kutik, the album focuses on music written during the darkest periods of the lives of these composers. Kutik releases his third solo album, Words Fail, on Marquis Classics in October 2016.