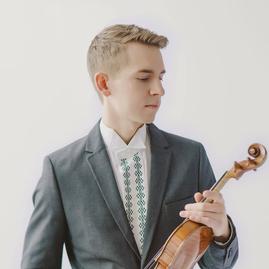 Since his successful debut at the age of six, violinist Emmanuel Borowsky (b. 1987) has been lauded as an outstanding musician of his generation. He has performed recitals and concerts throughout North America, Europe, Asia, and the Middle East and has frequently been featured on television and radio programs. His recordings for ICRecords (Pearls of Music, Music for Peace, and Musical Favorites of All Times) have been enthusiastically received by the public as well as music critics. At the age of seventeen he received the Erick Friedman Prize for Outstanding Young Musicians and performed his New York Debut at Carnegie Hall.

Emmanuel’s musical talent has been nurtured since early childhood: his mother is a cellist and his father is a noted social scientist who has used music as a tool to bridge people and nations. Emmanuel began his violin studies at the age of four and soon was performing concerts in the USA and abroad. At age ten, he performed Vivaldi’s A-minor concerto before a sold-out audience of over 9,000 people in Washington D.C.'s National Shrine and was rewarded with a massive standing ovation and the Antonio Vivaldi Medal. At age thirteen, Emmanuel represented North America at the UNESCO World Child Prodigies Concert in Amman (Jordan) and was honored with the distinguished Cultural Achievement Award. At fifteen, he was selected to perform on the prestigious International Public Radio Show “From the Top.” His performance was aired by over 250 stations in the USA and abroad. At eighteen, he performed for an audience of over 100,000 people at the World Youth Day in Cologne, Germany.

Among the awards Emmanuel has received are the Erick Friedman Prize for Outstanding Young Musicians, Pro Musica Award, Merit Award from the National Foundation for Advancement in the Arts, and Best Classical CD 1999 (for Pearls of Music). He is the winner of the Maryland Young Talent Competition and the Montpelier Performing Arts Center Classical Recital Competition.

Emmanuel has frequently performed together with his sisters Elizabeth (piano) and Frances (cello). Together, they are known as "The Young American Virtuosi.” Recent highlights include ten weeks as Artists-in-Residence at the Dilsberg Castle (through the Rhein-Neckar Kulturstiftung), a pre-Olympic “One World-One Dream-One Family” concert tour of China, and a U.S. tour as soloists with the Young German Symphony Orchestra.

Emmanuel performs on an 1894 Gustave Bernardel.