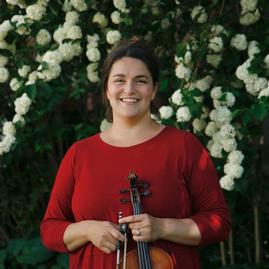 Violinist, Rachel Alexander is a graduate of the Conservatory of Music at Purchase College, where she studied with Laurie Smukler and Calvin Wiersma. She has also studied under Ludmilla Stote. Rachel holds her MA in Music Education (K-12) from Hunter College and was also a participant in the Starling-DeLay Symposium on Violin Studies at The Juilliard School.

Her professional performance career includes performances throughout the Tri-State and Greater New York areas in such venues as Carnegie Hall, David Geffen Hall, MoMA, The DiMenna Center for Classical Music, Saratoga Performing Arts Center, the Pepsico Performing Arts Center, the Eastman School of Music and Symphony Space NY, NY. She can also be heard on movie soundtracks and recordings of several rock bands and singer/songwriters.

Rachel is the founder of her own home studio located in the Ossining community where she provides private violin and viola lessons and chamber music coachings. Her students can be heard performing in their local music programs and youth orchestras as well as prestigious music programs including Manhattan School of Music Precollege and Ithaca College School of Music. She has also held faculty positions at the Larchmont Music Academy.