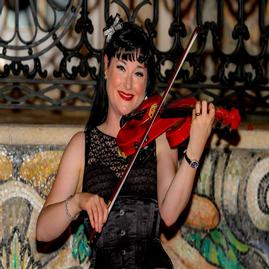 Michelle Jones is a versatile instrumentalist who performs every style from the most challenging classical music to the heaviest metal and rock music. She plays a variety of violins and violas to achieve these styles, and performs regularly on some of the world's greatest stages. Michelle is a Grammy Recording Artist, and is the President and Band Leader of Violectric, Inc., a string ensemble with live percussion that plays exclusive arrangements of classic and modern rock music on acoustic-electric instruments. Violectric performs compositions from AC/DC to Metallica to Led Zeppelin, and has appeared, recorded and toured around the world with most every major name act in the business from opera to heavy metal. Violectric has been featured in an exclusive special on PBS that continues to air nationwide. Violectric is an Official MTV Artist and is with Viacom networks, and their music can be heard daily on SiriusXM Radio. Violectric has also been selected as the first Artists in Residence for the new Dr. Phillips Center for the Performing Arts in Orlando, Florida, including live concerts and educational workshops with the Dr. Phillips Center Florida Hospital School of Art and Wellness.

Through Violectric, Mrs. Jones created and established an Educational Programs Series with interactive workshops and live concerts with students, and has performed multiple concerts at the Shekou International School in Shekou, China, BETA Center in Orlando, Florida, Osceola County School for the Arts in Kissimmee, Florida, Orange County Public Schools in Florida, and Full Sail University in Winter Park, Florida. Violectric Educational Programs have been featured on local and national television broadcasts (including PBS), and in Orange Appeal Magazine and numerous other Central Florida publications, and the members have been recognized for their philanthropy and commitment to education. Mrs. Jones was awarded the President's Volunteer Service Award by the White House and President Obama in 2013 and 2014 (Gold Award) for her many hours of volunteerism in the Central Florida Community and beyond.

Michelle also performs regularly on violin, viola, 5-string, vocals, keyboards and percussion with the international touring group Classic Albums Live based in Toronto, Ontario. With Classic Albums Live, Michelle has performed in the world-famous Massey Hall. She has been with this group since 2005, and enjoys recreating albums note for note, cut for cut with some of the most talented musicians in the world. Their recreations of albums by artists such as The Beatles, Pink Floyd, Rolling Stones, Aerosmith, The Who, David Bowie, and many others have been critically acclaimed by several of the original artists and many concertgoers around North America.

Michelle has been involved in educating students of all ages for over twenty years. She has served as an Adjunct Professor of Music at Converse College, Professor of Violin Studies at Suzuki Institute of Maitland, Director of Music for Windermere Community Church Preschool, Director of Music for Holy Family Catholic Church and School Early Education Center, and Music Instructor at Windermere Academy of Music. She also hosts master classes within the Central Florida public and private schools, and is frequently requested as a guest lecturer at many colleges and universities throughout the United States. Mrs. Jones currently is the owner of Strings Etc., a private studio providing music instruction for theory, arranging, and composition, and on various instruments, including violin, viola, piano and keyboards. She also is a certified facilitator of educational programs worldwide at the Walt Disney Company through the Youth Education Series and Disney’s English Language Programs.