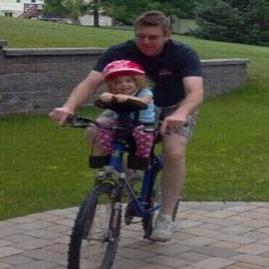 I began piano lessons in the first grade but only took lessons for several months. While in the Third grade I started violin lessons. I started on a full size violin that was handed down from my Great Grandfather. It was a bit big, but I was not a small kid, luckily. In middle school I started youth orchestra. It was not affiliated with any school and I remember it had some very talented kids. After a couple years I began viola in the same youth orchestra.
Finishing high school, working, and preparing for college did not allow much time for practicing. Violin studies declined. I was, however, asked to play violin in an orchestra with The Gilbert and Sullivan Society of Chester County and did so for a few years. Once again, life became too busy for violin and I was unable to play for about twenty years.
Eventually, my daughter became interested in violin and began taking lessons near the end of her kindergarten year. In order to become an effective practice buddy, I restarted and soon began taking regular lessons again. It did not take long for me to realize how much I missed playing. I practice every night. It has been three years since I restarted.
In 2019 I have been working on Mozart Sonatas and Concertos and some of the Bach Sonatas and Partitas as well as etudes and scales.
I currently own and operate a small business, Dennison-Jayne Motors, Inc., that restores and repairs antique Rolls-Royce and Bentley Motorcars. I mention this because I find it interesting that many owners of such cars tend to be very musical.