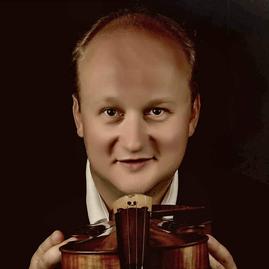 At the age of 12 recorded for Slovak Radio together with Julia Fisher as presentation of young talented violinists. Later on, Stefan was asked to perform for M.Kovac and R. Schuster, both Presidents of Slovak Republic. During his studies in Slovakia was awarded with 1st and Absolute Winner Prizes at National Competition of Slovak Conservatories. He holds also prizes from International Violin Competitions of Jaroslav Kocian and Bohuslav Martinu, Czech Republic. Important impulses were Masterclasses with R.Nodel, I. Bezrodnyj and V.Spivakov. At the age of 20, youngest in the history, won the leading position in State Philharmonic Kosice,leaving soon for his studies in Lucerne, Switzerland.

He became also Concertmaster of European Philharmonic Orchestra ( co-founded by Y. Menuhin) in Vienna as well as Concertmaster of Camerata Helvetica ( Urs Schneider) . In 2011 Stefan wins one of the leading positions at Palao de les Arts of Queen Sofia in Valencia, Spain, where he has served, also as Concertmaster under Maestros Z. Mehta, R. Chailly, P.Domingo,V.Gergiev,Sir A. Davis, O.M.Wellber and many others. Zubin Mehta wrote in his recommendation letter: I know Mr. Eperjesi since several years playing in Orchestra of Palao de les Arts in Valencia. He performed under my direction also as Concertmaster and I treasure him as a fine musician and very good violinist.