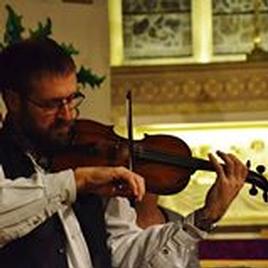 As a child he was born into a musical family, a distant relative of Ralph Vaughan Williams and grandson of the Bassoon Composer Geoffrey Hartley. He developed his skills in the church choir and the Kent Music School, gaining a music scholarship to King’s Taunton.

His teaching career started with a post as bass singer and teacher of maths and English at the Abbey Choir school in Tewkesbury. More recently he has been working in Somerset, teaching curriculum music and developing musical opportunities for youth, running the West Somerset Junior Orchestra and a plethora of different choral and instrumental groups. In this capacity he has written works for junior orchestra, strings and individual pieces for particularly talented members of the groups he runs. Some music is available from www.orpheusmusic.com.au, after he won a composition competition! His favourite work to date has to be the Violin Concerto,(but he's also produced 5 junior Symphonies, including one based on Sea Shanties.

Find links to published works in this facebook album

He has also been involved in the West Country’s folk music scene as a member of the Folk Group ‘Hearts of Oak’, and more recently with ‘Shake a Leg’. On his Youtube channel (KirbyFiddler) he has a playlist dedicated to fiddle tunes

DoodleArt originally arose from a wish to encourage extended quiet listening to music in pupils, but then he got the bug! see Doodleart

Rupert enjoys canoeing, having been a canoe instructor in the Ardeche, Southern France, whilst a student, and now regularly takes to the North Devon coast and rivers with his son, Martyn in kayaks.

He is also a keen amateur photographer, recording the beauty of the natural world around his North Devon home, particularly featuring 'The Lynton Goats'.

After four years out of teaching, driving heavy goods vehicles,(during which time he wrote "The Lorry Driver's Lunch" tunes, he is now returning part time to teaching and hopes to use more time to develop composition and performance projects