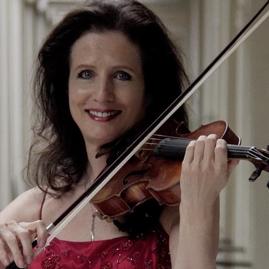 "Madeleine Mitchell is one of the UK's foremost violinists and liveliest musical forces" (The Times). She has performed in 50 countries as a soloist and chamber musician in major venues and frequently broadcasts for television and radio including the BBC Proms, ABC, Bayerischer Rundfunk, Italian TV etc. She is also known as an inspiring teacher and artistic director.
Mitchell is well known for her recitals in a wide repertoire and for her imaginative programming and eloquent introductions. She represented Britain in both the festival UKinNY with a recital at Lincoln Center and for the Queen's Diamond Jubilee in Rome, has given recitals at Sydney Opera House, Seoul Center for the Arts and Hong Kong - part of a 3 month world tour, played at many international and most of the major British festivals and frequently performs in London.

Madeleine Mitchell has performed violin concertos with orchestras including the Czech and Polish Radio Symphony, Wurttemberg and Munich Chamber, St Petersburg Philharmonic, the Royal Philharmonic and other London orchestras; Welsh Chamber Orchestra, Orchestra de Bahia Brazil, Malaga Symphony of Spain and for the BBC. She has had many works specially written for her by well known composers including Sir James MacMillan, Michael Nyman CBE and Errollyn Wallen CBE.

A highly creative personality, Madeleine Mitchell, with Lord Menuhin's patronage, founded and directed the Red Violin festival (before the film of the same name), celebrating the fiddle across the arts - the title inspired by 'Le Violon Rouge' paintings www.redviolin.co.uk

Mitchell was Fulbright/ITT Fellow to New York where she gained a Master's Degree at the Eastman School and studied with Donald Weilerstein, Sylvia Rosenberg and Dorothy DeLay (at Juilliard and Aspen).

Madeleine Mitchell is a Professor at the Royal College of Music (London), gives master classes worldwide (including annually in the USA), is Director of the London Chamber Ensemble and on the Faculty of www.orfeomusicfestival.com and www.lmfl.org in July and August.