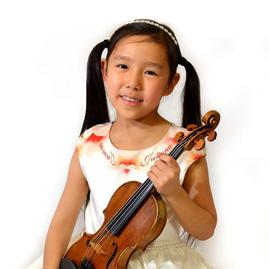 Hi, I am Leia and I am 10 years old from UK. I love playing the violin and doing stuff with my brother Leo. I like to post music videos of my violin performances (sometimes with my brother Leo), general vlogs, travel vlogs, behind the scene (my performances) documentaries. For more, please visit my Youtube Channel

I made my solo debut in the North East Last Night of the Proms in Newcastle City Hall in front of an audience of thousands at age four.

Since then, I have performed as soloist at some of the most prestigious venues in the UK and Europe, among them the London Royal Festival Hall, Barbican Centre, London St John's Smith Square, the Tchaikovsky concert Hall in Moscow, BOZAR( the Centre for Fine Arts) in Brussels and Berlin Philharmonie.

I am currently studying with Professor Itzhak Rashkovsky in London and attends Interlaken masterclasses (Zakhar Bron Academy) when possible. I also attend Junior Guildhall on the weekends with my brother Leo.
I play a rare 3/4 sized Italian violin generously loaned by an anonymous collector.