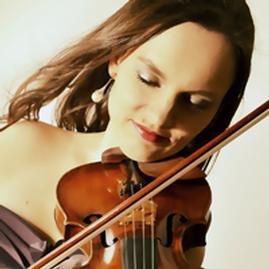 Kinga Augustyn is a Polish-born and New York City-based versatile classical concert violinist and recording artist gaining worldwide recognition through her performances as a concerto soloist, recitalist and chamber musician. She has been described as “an adventurous performer valuable to New York’s scene” (NY Concert Review), “stylish and vibrant…playing with verve and superb control” (The Strad Magazine), and “beyond amazing, one hell of a violinist!” (The Fanfare Magazine). Her repertoire ranges from early baroque, which she sometimes performs on a baroque violin, to modern, oftentimes written especially for her. She is known for unique programming of unaccompanied solo violin recitals.

Kinga Augustyn has performed as a soloist with orchestras in the United States, Europe and Asia. Among them are the Deutsches Kammerorchester Berlin, Magdeburg Philharmonic Orchestra, the Chamber Orchestra Leopoldinum, the Wroclaw Philharmonic Orchestra, the American Academy of Conducting Orchestra at the Aspen Music Festival, the Rogue Valley Symphony, and the Riverside Symphonia. She has toured China soloing with the Manhattan Symphonie and performing at China’s most prestigious venues such as Beijing Poly Theater and Shanghai Oriental Art Center. Other venues she has appeared at as a recitalist or chamber musician include both the Stern Auditorium and the Weill Recital Hall at Carnegie Hall, Alice Tully Hall, The Metropolitan Museum of Art, Merkin Hall, The Kosciuszko Foundation, Bargemusic, The Aspen Music Festival, and Chicago’s Cultural Center. She has also performed as a featured artist at such festivals as the Memphis in May International Festival, Festival Amadeus in Montana, Paderewski Festival in California, the Sevenars Music Festival in Massachusetts, and the Henryk Wieniawski Festival in Poland. Kinga Augustyn frequently performs unaccompanied solo violin recitals. A unique artist, she has collaborated with The Jose Limon Dance Company in multiple performances at the Joyce Theater and Bryant Park in NYC.

Kinga Augustyn’s most recent and critically acclaimed recordings include the Mendelssohn and Bruch Violin Concerti with Janacek Philharmonic Orchestra and Jakub Klecker, and Telemann 12 Fantasias for Solo Violin, both on Centaur Records; Niccolo Paganini 24 Caprices for Solo Violin on RovenRecords; and Glen Roven’s Runaway Bunny Concerto performed with Catherine Zeta-Jones as a narrator and featuring Kinga Augustyn’s Solo Violin Cadenza on GPR Records. Committed to increasing awareness of music by Polish composers, in addition to promoting contemporary music, Ms. Augustyn has made a significant contribution to Polish music by recording a highly praised album of lesser known Polish Violin Music. Released by Naxos, the recording was called by The Strad Magazine a “fascinating traversar of a century and a half of virtuosic music from Poland” and it includes many world premiere recordings of not only 20th century but also 19th century works. The Fanfare Magazine compares the excitement in Augustyn’s performances of Zarzycki’s Mazurkas to David Oistrakh’s and it applauds her “fresh and dramatic approach to Lipinski’s music” predicting that it “shall bring her new admirers.” Music Web International calls Kinga Augustyn “another discovery.” Ms. Augustyn will release two new albums in 2018: World premieres by the Polish composer Romuald Twardowski (b. 1930), performed with Torun Symphony Orchestra; and Modern Violin including multiple works written especially for her.

Kinga Augustyn began her music studies at the age of seven in her native Poland. Her first violin teachers were Aleksandra Bogdan and Zbigniew Szuflat. Musically she was also influenced by her mother, soprano Mariola Augustyn. She continued her musical education at The Juilliard School with Dorothy DeLay, Cho-Liang Lin, and Naoko Tanaka, and earned there both the Bachelor and the Master degrees. Augustyn also holds a doctorate from the Stony Brook University, where she worked with Phil Setzer and Pamela Frank. Her other former teachers include Petru Munteanu, Piotr Milewski, and Kurt Sassmannshauss. The last few years she has coached with Philip Greenberg, who is a former violin student of Josef Gingold and the Artistic Director of the Kiev Philharmonic.

Dr. Augustyn has many years of experience in training students at beginning, intermediate and advanced levels. She utilizes different methods that are tailored to the needs and abilities of her students. Having studied with world famous teachers and musicians, she enjoys passing on the body of knowledge she has gained herself. Ms. Augustyn has served on the Violin Faculty for The Alexander & Buono Festival of Music. She has also conducted various violin, piano and chamber music masterclasses and workshops in the United States and Poland. Most recently they have taken place at Queens College, Florida Gulf Coast University, Millikin University and Wroclaw Music University.In addition to lessons in NYC, she also teaches through Skype.