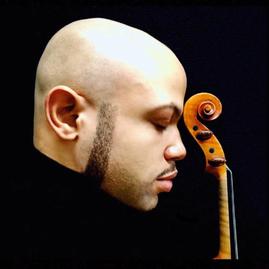 His most recent compositions include complete scores for 2 theatrical works, 3 multi-movement string quartets, and "The Abraham 24 Caprices for Solo Violin", which have premiered in 3 countries.

Dr. Abraham has performed in 7 countries, been featured on CBS Detroit, PBS Arizona, The Entertainer, SHAR Music, Fiddlerman, the "Mind Over Finger" and "Violin Podcast" iTunes podcasts, and much more. His Instagram @TheViolinDoctor engages 20K followers. Violinists Mark Wood and Chloé Trevor are the three ambassadors of Southwest Strings.

Dr. Abraham began music studies at in 2004 under Chicago Civic Orchestra Concertmaster, Guillaume Combet. Only months later, he auditioned into the Merit School of Music Conservatory. In the next three years he placed 2nd in the institution's Annual Concerto Competition and became Concertmaster of the Merit Symphony Orchestra.

Graduating with highest honors, he continued violin studies at the University of Michigan under Naumberg Award-Winner, Andrew Jennings. There he began to compose and explore the Electric Violin as well.

In 2013, he won the Blue Lake Fine Arts Camp Concerto Competition, soloing the Conus Violin Concerto for a live audience of over 1,500 and airing live on FM Radio. In 2014, he placed 2nd in the Stamp.FM Online Music Awards, and opened for world-class bands We The Kings and HelloGoodbye at the Michigan Theater.

His first year in Arizona, he won the University of Arizona 2015 Concerto Competition with the Brahms Violin Concerto. He premiered his own cadenza, replacing the 1867 standard by Joseph Joachim. Dr. Abraham also served as the Arizona Symphony Orchestra concertmaster for two years under Maestro Thomas Cockrell, and the Arizona Contemporary Ensemble ("ACE") under Maestro Daniel Asia. He also is a recipient of the Fred Fox School of Music? Graduate Fellowship.

Dr. Abraham has enjoyed work as the concertmaster of the Michigan Pops Orchestra, sub-anchor for Blue Lake Public Radio, Violin Specialist for the Sphinx Organization, Violin; Viola; Cello; faculty at the Chicago Music Store, Allegro School of Music, Blue Lake Fine Arts Camp, and as the United States Consultant for the 1st Oskar Rieding International Competition for Young Violinists. He also served two years as an assistant teacher for the University of Arizona, giving weekly lectures in music history.

Today, Dr. Abraham directs his own private studio of two-dozen local Arizonan students (sign up here!) He plays on a modern violin by renown Japanese luthier, Tetsuo Matsuda. He is also the creator of Facebook’s most popular bowed-string forum, The Violin Guild™, comprising over 30,600 members worldwide!

• "There is a sense of utter commitment in his playing, and quality in his approach to performance that is unique and captivating." —David Halen; St. Louis Symphony Concertmaster