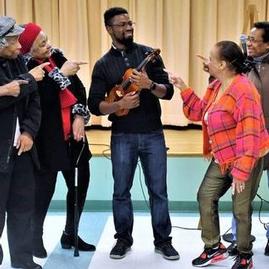 Alexander began playing the violin in the Prince George's County public school system at the age of ten. His strings teacher encouraged Alexander to take private lessons, so he began to learn the fundamentals of playing the violin from Ms. Gaile whom inspired Alexander to better himself as a violinist. Ms. Gaile tragically lost her battle from cancer, but through her teaching Alexander progressed in his local youth orchestra. Alexander had the opportunity to perform at the Kennedy Center with the Prince George's Youth Orchestra. He continued his violin studies by attending summer music festivals such as the Philadelphia International Music Festival at Bryn Mawr College and the International Music Institute and Festival in Emmitsburg, Maryland. Alexander then went on to receive his Bachelor of Arts in Violin Performance from Dickinson College. During his time at Dickinson, Alexander had the opportunity to perform in masterclasses with the concertmaster of Baltimore Symphony Orchestra, Jonathan Carney and virtuoso Chin Kim. Alexander also performed in a master class for the concertmaster of the Philadelphia Orchestra, David Kim. He had the unique experience of playing Mozart's Eine Kleine Nachtmusik K.525 in the 1st violin section with David Kim. He also traveled with his Violin Professor Blanka Bednarz and toured in Poland with Sinfonietta Polonia where they performed in historic churches and theaters to celebrate the New Year's Holiday.

In 2013 his grandmother was diagnosed with breast cancer and Alexander performed "How Great Thou Art" in her hospital room before the nurses took her in for surgery. The doctors and nurses were all touched by the music and shared that the atmosphere of the hospital was calmer and more peaceful than before he had played. Alexander then realized that he wanted to dedicate his life to bring healing to people of all walks of life through his violin playing. Alexander shares his talents in local hospitals and assisted-living facilities where he performs for residents, patients, nurses, and doctors. He also uses music to interact and engage with children with Autism in the community. In 2014, Alexander traveled to Japan with TEAM international missions where he played in churches, hospitals, universities, retirement homes, residential homes, mental facilities, and reformatories throughout the Azumino and Matsumoto areas in Nagano prefecture. He also ventured with a team from both Azumino Family Chapel and Abundant Life Church to Kamaishi in Tohoku where he played for victims of the tsunami during the three-year anniversary of the tragic disaster. Alexander has performed in a variety of groups ranging from Go-go to indie/folk. In 2015, Alexander collaborated with Backyard Band for the Battle of Bands at the Howard Theater where he created original violin compositions. He was also invited to perform a fallen heroes tribute for the United States Secret Service.

Alexander began teaching violin in 2011 to interested students in his local college community. He continues to teach throughout the MD area and is passionate about empowering students through the power of music. Alexander uses a combination of etudes and traditional Suzuki methodology to teach technique while using popular tunes to teach rhythm and body movement with the violin. He has taught students from ages 5-55 and has experience with teaching children with special needs. Alexander's goals for his students are for them to discover their individuality as a musician and share their music in the community. Alexander learned through his teachers, Blanka Bednarz and Ben Shute, that music is more than the notes on the page but the person performing them.

Alexander currently plays in Hospice for patients as a part of the Healing Arts program and at Walter Reed in Bethesda in the rooms of patients to provide therapeutic music.