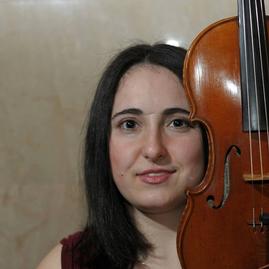 Belarusian-American violinist Inna Langerman is an avid freelance chamber and orchestral musician, performing music ranging from the Renaissance through the 21st century. She comes from a musical family and began her studies in music at five years old. Inna holds two Master’s degrees and an Artist diploma from SUNY Purchase College, along with a Bachelor’s degree from Queens College’s Aaron Copland School of Music. Teachers she studied under include Daniel Phillips, Joey Corpus, Cal Wiersma, and Deborah Buck. Inna is a resident of Brooklyn, NY and regularly performs across the five boroughs, Long Island, New Jersey, Westchester County, and Connecticut with various ensembles. She has performed in major venues, which include Carnegie Hall, David Geffen Hall, Alice Tully Hall, the Rose Theater of ‘Jazz at Lincoln Center,’ Merkin Hall, the DiMenna Center, and in the summer of 2016, Tokai University in Japan. Inna developed her passion for teaching with the Interschool Orchestras of New York, where she taught for six years in a program that offers free after-school lessons to children. In 2011, she joined the faculty of the Harmony Program, an organization inspired by El Sistema, as an upper strings coach, assistant conductor, music theory teacher and music arranger. In 2014, she was a guest on CUNY TV with the Harmony Program to advocate for music education. Inna is currently on the violin faculty of Third Street Music School Settlement, where she teaches individual lessons, group repertoire classes, and chamber music. She is a recipient of the Discimus Ut Serviamus award and the Miranda Arts Project grant for serving the community through music.