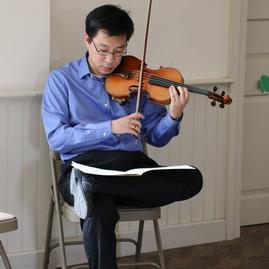 Violinist, Darwin Shen has been performing as a soloist in concert halls and with ensembles and orchestras all over the United States for over twenty years. Although he continues to perform much of the standard violin repertoire of concertos, sonatas and short pieces, in recent years he has specialized in resurrecting lost or rarely performed works of the late 19th and early 20th centuries. He has been sought after by other artists and musicians as an expert in these works, and his most recent projects in this area have been published online.

Most recently, Darwin reconstructed the 1940’s Heifetz arrangement of Irving Berlin’s White Christmas and rare pieces by Leopold Auer and John Crowther, and published his work online in video format. Darwin is currently working on a number of similar projects.

In addition to his performance schedule, Darwin maintains a teaching studio for pre-college students in the New York metropolitan area. His students have gone on to study at many of the major music conservatories and colleges in the United States. Darwin is also the founder and executive director of the Violin Audition Prep Program, an annual, intensive program which is designed to teach young musicians how to approach and perform in auditions of all types, including for college and conservatory admissions and orchestra placements. He also works with student orchestras and school music programs as a guest teacher, helping students work through intensive rehearsals or difficult pieces.

Darwin performs on various instruments depending on the genre and instrumentation of the performance. His main concert instrument is a Honore Derazey circa 1870. An ardent supporter of modern instrument makers, Darwin also performs on instruments by Robert Isley and Kenneth Beckman amongst others.

Darwin studied violin with Paul Kantor, Kyung Yu and Yuval Waldman. He also has a BA degree in History from Manhattanville College.