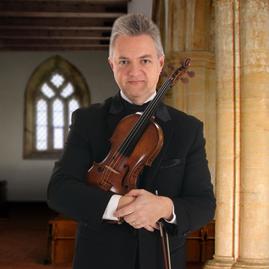 David McFadden studied violin at the Royal Conservatory of Music, the University of Toronto, and the Utrechts Conservatorium in the Netherlands.
He performed regularly with the Toronto Symphony for 15 years and has been active in the recording studio and freelance music scene of Toronto. His long list of affiliations includes the Canadian Opera Company, National Ballet, Kitchener Symphony and Symphony Nova Scotia.
His varied career has taken him from chamber music to musical theatre where he was Concertmaster for shows like Ragtime, ShowBoat and Sunset Blvd. Other shows include Joseph and the Amazing Technicolor Dreamcoat and Phantom of the Opera and Beauty and the Beast. Other ventures have included recordings and concerts with a wide range of musical styles and performers such as Ray Charles, Liza Minelli, Natalie Cole, Bobby Vinton, Donny Osmond, Smokey Robinson, Andrea Bocelli, Olivia Newton John, Johnny Mathis, Blue Rodeo, The Philosopher Kings, Josh Groban, Deep Purple, Wayne Newton, Michael Bolton, Allan Jackson and Peter Gabriel.
Mr. McFadden is actively involved in worship ministry and together with his wife Julie, they are the Music Directors at the Muskoka Bible Centre.
In addition to performing and teaching, David's interest in violins, combined with years of training at the Violin Craftsmanship Institute at the University of New Hampshire, has resulted in the Bravura House brand of stringed instruments, bows, cases and accessories. He is a one stop shop for rentals, repairs, bow rehairs, sales, lessons, and performances.