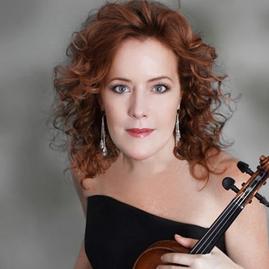 The violin artistry of Desirée Ruhstrat has captivated audiences throughout Europe and the Americas. The Berlin Taggespiegel wrote, "...she played with such an intensive fire and sleepwalking assuredness that she was stormily celebrated by the audience." Ms. Ruhstrat is renown for her versatility as a soloist, Chamber musician and teacher.

She has worked with such renowned conductors as Eric Kunzel, Max Rudolph, William Smith, Rico Saccani, Brian Priestman, JoAnn Falletta, Mats Liljefors among others. Ms. Ruhstrat has won numerous awards including first prize at the National Young Musicians Debut Competition in Los Angeles, where she was also lauded a special award for a young performer with extraordinary talent. She became the youngest prizewinner at Switzerland's Tibor Varga International Competition and also won the award for best interpretation of the commissioned contemporary composition. She went on to earn top prizes at the Carl Flesch, Julius Stulberg, and the Mozart Festival Violin Competitions.

Ms. Ruhstrat's distinguished career as a chamber musician includes performances throughout the US as a member of the Lincoln Trio, including Carnegie Weil Hall, Lincoln Center, Ravinia Festival, Indianapolis Symphony Beethoven Series, Poisson Rouge and Music In the Loft. She has also appeared as guest artist of the Chamber Music Series of the Philadelphia Orchestra, Colorado Symphony, Apollo Chamber Ensemble, the Colorado Chambers Players, Pacifica Quartet, the University of Oklahoma, Wisconsin, Tennessee, and Northwestern University Midwinter Series with Jorge Federico Osorio and Ani Kavafian, as well as collaborations with Shmuel Ashkenasi, Ilya Kaler and Roberto Diaz. Festival appearances include the Aspen Music Festival, Peninsula Music Festival, Laurel Festival of the Arts, the Breckenridge Music Festival and the Green Lake, University Of Wisconsin, Utah Music Festival, and ARIA International Summer Academy, Curtis Institute of Music Young Artist Program, where she has also served as faculty.

A champion of new music Ms. Ruhstrat has worked with some of the worlds leading composers, George Crumb, Jennifer Higdon, Shulamit Ran, Augusta Read Thomas, Chen Yi, Zhou Long and most recently had a work written for her by Laura Elise Schwendinger "Violinists In My Life."

Ms. Ruhstrat is a graduate of the Curtis Institute of Music. Her teachers have included Aaron Rosand, Joseph Gingold, Harold Wippler and Dorothy Delay. Her discography includes the Stamitz Duo for Violin and Viola for Centaur Records ,the Ravel Duo for Violin and Cello for Albany Records, a 2013 GRAMMY nominated NAXOS release Annelies, based on the Diary of Anne Frank and multiple recordings with the Lincoln Trio on the Cedille Label and a 2017 GRAMMY Nomination for Trio’s From Our Homeland’s.

A passionate teacher, Ms. Ruhstrat's students are prizewinners of national and international competitions and members of professional orchestras worldwide. Ms. Ruhstrat has been on Faculty at the Jacobs School of Music at Indiana University Bloomington and currently is on faculty and serves as the Strings Chamber Music Coordinator at Northwestern University Bienen School of Music. In 2014 Ms. Ruhstrat was awarded the American String Teachers Association Illinois Outstanding Studio Teacher Award.