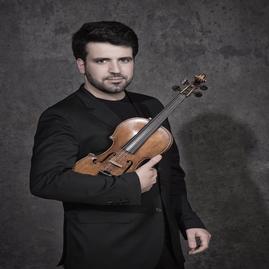 Boris Borgolotto, violinist and winner of many international solo prizes, stands out thanks to the liveliness and sensitivity of his interpretations and his communicative stage presence. In 2011, Boris won the 1st prize of the IBLA Foundation in New York, as well as the “American Fine Arts” 1st prize. He made his Carnegie Hall debut and toured the US in 2012. He was also invited as "Rising Star” at the Great Music Festival in South Korea. His work has lead him to collaborate with artists such as Vadim Repin, Kyung-Wha Chung, Mihaela Martin, Pavel Vernikov, Kyung-Sun Lee, Ivry Gitlis et Patrice Fontanarosa, and he has played under the baton of masters like Ton Koopman, Myung-Whun Chung, Stéphane Deneve and Joe Hisaishi.
Among the prestigious halls Boris has played in, we can name the UNESCO, Châtelet Theater, the Paris Philharmonic, Salle Pleyel, Salle Cortot, Salle Gaveau, the Radio France Auditorium, Carnegie Hall, Wigmore Hall, the Haydn Hall in Vienna, Bozar and Flagey in Brussels, the Podgorica Theater in Montenegro, the Macao Concert Hall, Forbidden City Concert Hall, Shanghai City Theater, the Harbin Opera House,Tianjin Grand Theater Concer t Hall, the Seoul Ar t Center and the Walt Disney Hall in Los Angeles.
He has also been invited to be a member of the jury at numerous competitions and also giving Masterclasses across the world, including China,Tainan University of the Arts, Canada, McGill University’s Schulich School of Music, France, South Korea and U.S.A.
Boris began playing the violin at the age of seven and received his violin diploma with a special mention from the jury at the National Paris Conservatoire in 2012. He then studied at the Music University of Vienna with Dora Schwarzberg.
With the American pianist Ian Barber, and his childhood friend Marc Girard Garcia, Boris created the Zadig Trio. Since its foundation in 2014, the Trio has won 11 international prizes in France, the USA, Austria and Italy, and is regularly invited to play in great halls worldwide. The ZadigTrio is currently associated artists at the Queen Elisabeth Music Chapel.
Boris Borgolotto plays a 1750 violin by the famous Italian maker Carlo Antonio Testore.