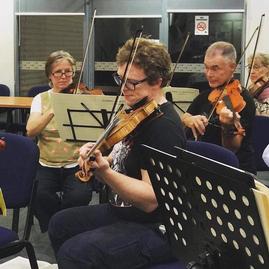 Ben is a musician, teacher, composer and arranger, and blogger, based in Ellenbrook, Western Australia. He lives there with his wife, Liesl, and three kids. Away from music, Ben enjoys running and woodworking.

Currently teaching Violin through West Coast Music School and studying a Master of Teaching (Secondary) at Edith Cowan University, Ben is currently a member of MetSO.

As a composer and arranger, Ben's music has been played by members of the London Philharmonic Orchestra and The Salvation Army's Melbourne Staff Band, and his arrangement of Pachelbel's Canon in D for solo violin has been played by violinists all over the world.

Ben has received a Bachelor of Music (Music Studies) and an Advanced Diploma of Performing Arts from the Western Australian Academy of Performing Arts. He has studied under – amongst others – Peter Tanfield, Rebecca White, Jacek Slawomirski, Zak Rowntree and Fiona Chong.
Ben has been involved in a wide variety of musical endeavours in his time, including starting an annual Fundraising concert for the Council of Churches of WA and Christmas Bowl, which raised almost $2000 annually, and spreading the word about these vital causes. He was also musical director of the Darlington United Carols by the Lake in 2006 – 2008. As an orchestral player he has played with the Western Australian Youth Orchestra, WAYMA Philharmonic, Faith Court Chamber Orchestra and the Faith Court Orchestra. He has also played in the pit for performances of Oklahoma! (WAAPA), The Mikado and Princess Ida (Gilbert and Sullivan Society of WA), Into the Woods (Roleystone Theatre), Spamalot (Playlovers) and Joseph and his Amazing Technicolor Dreamcoat (Limelight), and in the World Premiere of Follow the Light, a musical by Nick Choo.
Ben also ran a private teaching business from 2004 to 2011, and has taught at Guildford Grammar and Thornlie Christian College.