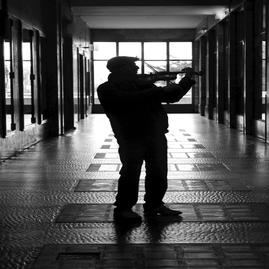 My mother was singing at the Opera "Stora Teatern" in Göteborg, Sweden and kept doing this until some months before my birth. For a long time, I thought, it was in "Porgy and Bess" by Gershwin, but I checked with her and it was in "Orpheus in the Underworld" by Offenbach. Influenced? Most probably.

Music was always in and around me. Madame Skilondz, Stockholm, to whom my mother and sister went for singing lessons loved my musical expression, so, as a little boy, I was often asked to sing for her.
As a nine years old boy I went by myself to the Opera in Stockholm, which caused some adults wondering, whether there was a home somewhere for me. And now I realise that the question was somewhat predestined. Nevertheless, I was in love with the music and also in some beautiful female singer or balletdancer, which was a good reason enough for being present.

Violin, yes. I started first, when I was sixteen, but then it went quickly, but, of course, with this late start things have not always been easy.

Since September 2006 I have again a violin after eight years without even touching a single one. It's a long break, but it seems like something important happened during all these years of not touching and thus not playing. To my great pleasure, I had learned to practise better and the results are encouraging, at least for me.

Further, I'm wondering why all these great violin solos played by wonderful violinists in movies not are credited except for Isaac Stern (Humoresque, Fiddler on the Roof) and Joshua Bell (The Red Violin). They are mentioned due to their fame. But all the others? I would like to know who they are, so this will be a project of mine.