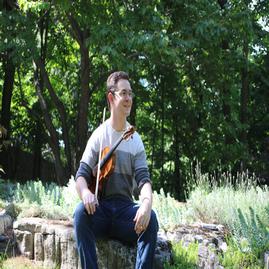 He received his Master of Music degree from Boston University where he attended with a merit scholarship and studied with Professor Bayla Keyes. While in Boston he performed in the greater Boston area with The Hugo String Quartet coached by Rhonda Rider, worked as a graduate teaching assistant, and coached Boston University's All-Campus Orchestra.

Prior to his time in Boston, Andrew completed his Bachelor of Music degree at the University of Toronto as a student of Timothy Ying and Jacques Israelievitch. His childhood teachers included Karma Tomm, Stelth Ng, and Eric Watson.

With a passion for music old and new, he has played principal roles in the Boston University Baroque Orchestra and the Contemporary Ensemble. Collaborating with Boston University's contemporary music and electronic music departments he organized a performance of The Black Angels String Quartet by George Crumb in 2019.

In the field of historical performance, he has studied Baroque violin and viola d’amore with many of the musicians of Tafelmusik and the Handel and Haydn society. He took classes on the Baroque violin at Boston University and the University of Toronto studying with Jane Starkman and Jeanne Lamon respectively. While in Toronto he performed with the University of Toronto's Baroque Orchestra, Jazz Ensemble, and Contemporary Music Ensemble.