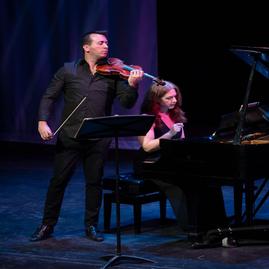 "The Violin Concerto by Finnish composer Jean Sibelius is a formidable challenge for any violinist, and Sords met that challenge in a flawless performance displaying not only mastery of his instrument but also maturity and sensitivity in the interpretation of this complex work."

"It's not often that one finds this kind of sheer awe-inspiring talent in such a young musician, but Andrew Sords is an impressive example..."

American violinist ANDREW SORDS has a celebrated career as a soloist, recitalist, and in performances with his trio. Having appeared with nearly 300 orchestras on 4 continents, Sords has been cited for combining visceral virtuosity with a ravishing tone, while international critics endorse Sords as “a fully formed artist” (Kalisz-Poland News), “utterly radiant” (Canada’s Arts Forum), and “exceptionally heartfelt and soulful” (St. Maarten’s Daily Herald). Closer to home, ClevelandClassical.com gushed: “the stunner of the afternoon was a breathless but magnificently controlled performance of Beethoven’s “Kreutzer” sonata, which Sords charged through with giddy aplomb. Sords impressed with his total command of technique, consummate musicianship and bravura as he tossed off scads of notes and sang out like a diva - he and Eriko Izumida kept the audience in the palm of their hands all afternoon.” A 2022 début for Palms Springs Concerts elicited the Desert Sun to enthuse: “[The Sords-Walz-Durkovic Trio’s] playing was not just technically superb; it was melodious, resonant, expressive, and passionate. The audience could not stop applauding.”

As a prolific recitalist, Sords has appeared in La Jolla, Washington, D.C., Maui, New York City, Los Angeles, Chicago, Dallas, and at St. Augustine’s (FL) EMMA Series at Flagler College. Sords has toured to Australia with concerti by Mendelssohn, Mozart, and Vaughan-Williams, as well as virtuoso programs for the Brunswick Beethoven Festival and the Arden Crescent Series. The Brahms “Double” concerto has been a popular vehicle of late: Sords has been featured with cellists John Walz, Joseph Johnson, Sawyer Thomson, and Scott Lykins in recent performances. A 2015 Canada tour with the Mendelssohn Piano Trios and Violin Sonata was reprised in 2017 with all-Brahms programs in Oshawa, Montreal, Guelph, and Toronto. First invited by San Miguel de Allende’s (Mexico) ProMusica Series in 2011, Sords has returned with six varied recitals; with pianist Eriko Izumida, the two returned to West Palm Beach’s Norton Museum Series and introduced baroque rarities to Cathedral of St. John’s Concert Series (Cleveland). Sords has been a frequent soloist in the Caribbean, appearing in Puerto Rico, Anguilla, St. Maarten, Trinidad and Tobago, Grand Cayman, and the U.S. Virgin Islands - and “STRINGS MAGAZINE” profiled a series of performances with the Trinidad and Tobago Youth Philharmonic.

A man of diverse interests, Sords has competed in the charity fundraiser “Pittsburgh’s Dancing With The Stars” as the first classical artist to do so. Passionate about social causes, Sords has performed numerous times for LGBT outreach, including Bruch’s “Scottish Fantasy”, Tchaikovsky, and Beethoven in collaborations with the Minnesota Philharmonic, the Bay Area Rainbow Symphony, and the Atlanta Philharmonic. Along with Liana Izakadze’s World Virtuosi, Sords appeared in Carnegie Hall’s Zankel Hall, and performed the Sibelius and Dvorak concerti in 2019 appearances with the Jackson Symphony and Brevard Symphony. Sords is a popular guest for various media platforms: featured four times on Sirius XM’s Derek and Romaine Show; profiled by “OUT Magazine”, NPR’S Morning Edition, Australia’s ABC Music Now, Cleveland’s WCLV, and Colorado Public Radio; Sords also performed the National Anthem for ESPN2’s WNBA Pride Game (2014) and a sold-out Cleveland Indians game at Progressive Field. Sords’s recent collaboration with Sean Christopher on the New-Age album “Transcendence” has been a commercial and critical success, with reviews stating: “much of this is owed to the gorgeous and precise playing by Andrew Sords, whose violin adds a thrumming undercurrent of pure life throughout the album’s stainless steel structure.” This album is available on iTunes, Amazon.com, and CDBaby.

Born in Newark, Delaware, Sords was raised in Shaker Heights, Ohio, and asked for piano lessons at age five. Shortly thereafter, Sords commenced violin lessons, and his studies led him to the ENCORE School for Strings, the Cleveland Institute of Music, and Southern Methodist University. As a teenager, Sords garnered prizes from concerto competitions (including the NFMC National Competition and the Pittsburgh Society Career Grant), signed with management, and cultivated a media and audience following from innumerable interviews, profiles, and appearances. Following Sords’ debut in Australia, the Melbourne Age declared, “Sords made a voluble soloist in Mozart's Turkish concerto, forging his statements with an admirably firm clarity and bringing out the work's virtuosity as often as possible. His bowing arm showed an attractive suppleness and an attention to variety of phrasing that made even the episodic finale a pleasure.” Sords makes his home in Chagrin Falls, Ohio, and his website yields up-to-date news and touring activities: http://www.andrewsords.com.