August 21, 2022, 3:23 PM · As classical musicians, we tend to think that practicing as much as possible is the goal. Taking breaks and time off from practicing are not really part of our culture, and it’s not unusual for people to equate taking breaks with being lazy. While it’s true that putting in the hours is important if you want to improve, breaks are actually the most important part of practicing. 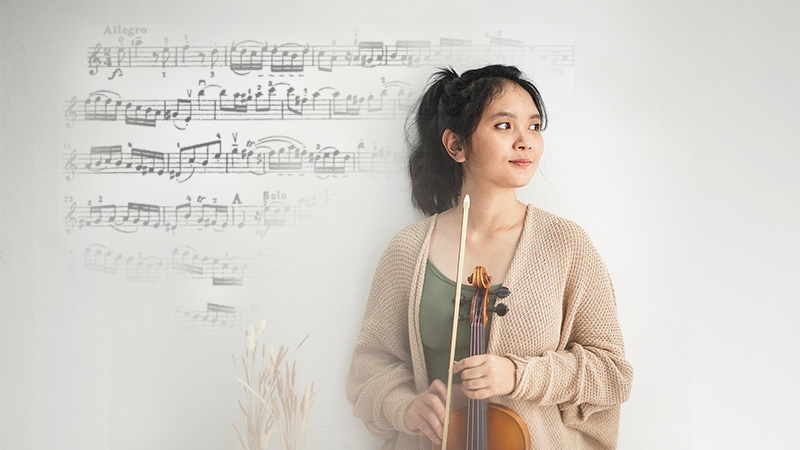 Research on the science of learning has shown that the brain physically changes when we learn something new or improve at a skill. But in order for these changes to happen, the brain needs time off from working. The analogy I use to describe this is road construction: just like people can’t be driving on the road while it’s undergoing construction, the brain needs you to take a break so it can do its own reconstruction. Until this reconstruction has happened, you will be stuck at the same level of ability. But taking breaks will give your brain the time and space to make the necessary physical changes, and when you come back to practicing, you will be at a higher level than before.

If learning is defined as changes in the brain, that means learning happens predominantly during breaks, not when we are actively practicing. This is incredibly counterintuitive, but once you understand this principle, it can help you practice more effectively.

The video below explains a study on microbreaks, which is a great way to get started with incorporating strategic breaks into your practice sessions. I’ll explain the findings of the study below if you’d rather read instead of watch.

In this study, the researchers had people learn a short key-press sequence on a computer keyboard. The goal was to perform this sequence as quickly and accurately as possible. The participants in the study got to practice for 10 seconds, and then they would take a 10 second microbreak. They kept repeating this process – 10 seconds of practice followed by 10 seconds of break – while the researchers measured their performance.

In the end, the researchers found that the bulk of the improvement happened during the breaks, not during the practice sessions. In fact, after each microbreak, the participants would perform at a higher level than before the break. The most fascinating finding to me, though, is the brain activity they observed. The researchers found that during the breaks, the brain would do a super-fast replay of the key-press sequence, continuing to practice it 20 times faster (and backwards, which they don’t really understand). And the participants weren’t mental practicing or anything during the 10 second microbreaks. They were just sitting there doing nothing, and yet their brains were continuing to practice in a hyper-efficient way.

What does this mean for us as musicians?

I find that a group of three repetitions before a microbreak is the sweet spot for me – it’s enough to test whether I’m consistent, but not so many repetitions at once that I get bored or unfocused. But the real key is the breaks: taking little microbreaks helps solidify my playing much more effectively than when I used to do it without breaks. I also find that my work sticks with me better over time because of the breaks, which is an added bonus.

If you want to learn more about the science of taking breaks, why it works, and ideas for incorporating this into your practicing, the video above is actually Part 4 in a longer series on the power of breaks. The full series is here:

I hope you’ll try out this idea and rethink the role of breaks in your practicing. Rather than being wasted time, they are critical for learning in the most efficient and effective way possible.

August 22, 2022 at 05:30 PM · Thanks very much for posting this. There are so many gems now for maximizing our use of our minds, this looks like a top of the heap one.

August 23, 2022 at 01:15 AM · I sort of figured this out by intuition. You should tolerate some brain-hurt when you're first analyzing something, but I don't see any need to push so hard when I get to the technical part.

I'm surprised, though, how micro a micro break is according to the study. I usually take 2-5 minutes off.

August 23, 2022 at 05:07 PM · Thanks Molly, for posting this and for summarizing the video (I always read and never watch). In my practicing I have naturally incorporated short breaks as a way of coming back fresh. I pour another tea or organize a pile, then return to my instrument. Another form of my breaks is switching back and forth from violin to gamba.

August 23, 2022 at 05:16 PM · I think I am more likely to push through, not just with practicing, but with any activity. It's wonderful to have this information that encourage breaks, and very helpful to see some ways in which science backs it up. I feel like I can apply it to practicing, to writing, to just about anything that involved sustained concentration. Thank you Molly!